Posted on April 6, 2018 by admin in Battle Briefings

Malaya (now Malaysia) had already been invaded by the Japanese, starting on December 8th, 1941, with an initial fly-over bombing attack. Through December into January, most of the unprepared surviving Allied troops stationed around the island had already retreated down to the bridge leading into Singapore. It was a terrible rout by the Japanese, who had maps of every part of Malaya, including the centralized “impenetrable jungle,” due to many years of information gathering by Japanese intelligence people, acting as regular citizens in Malaya and Singapore.

Many Allied forces were lost on the road of retreat, including those left behind who were too injured to be moved and their medical personnel who stayed with them to the last. They were rounded up, beaten, used for bayonet practice, and generally massacred on the spot.

Off the coast, the British battleship, HMS Prince of Wales and the battlecruiser HMS Repulse, were both sunk in a vicious battle from the air and by submarine.  This left Singapore without any naval defenses to come to their rescue.

The final retreating Allied troops crossed the Johore Causeway into Singapore on January 31st, which was then partially blown up by British Command under Colonel A. E. Percival, a hero of the first World War. Singapore itself was now the final objective for the Japanese invading forces. There were 85,000 men at the start of the invasion,  but by now many were non-combatants, were part of medical teams, or soldiers who no longer had any weapons after enduring the retreat, along with those who were injured and being cared for.

Essentially, Singapore was now a sitting duck in the open with no defenses to protect its people.

The Assault Begins on Singapore

On the Japanese side, 30,000 battle-hardened troops of the 5th, 18th, and Imperial Guards, were commanded by General Tomoyuki Yamashita of the 25th Imperial Japanese Army. His forces were supported by 35,000 troops and Malayan laborers who fortified the supply lines on the main line, although supplies were getting very low.

Singapore was shelled and strafed with tracer bullets constantly over the next few days from February 8th onwards, and the entrenched population were dying daily from that, as well as from fragments of bombed buildings that hit them. Churches, hotels, the Cricket Club, Singapore Club, and the post office had been turned into makeshift hospital wards for the wounded.  Drinking water and food was in short supply and many were suffering from the heat at well.

On February 15th, General Percival finally ceded defeat and met with General Yamashita at the Ford Motor Factory at Bukit Timah. The Japanese had plenty of journalists and photographers on hand to record the surrender, and the pictures and news were sent around the globe.

What was once a thriving port of the British Empire, was now in ruins. Most of the soldiers, those not executed outright, ended up in concentration camps for the next few years, including Percival. Neither side, at the time of the surrender, fully understood the historical importance of the event until years later. For the British Empire, it was the worst military disaster in its military history.  The event also made clear that the British colonial way of life had become outdated and closed in its philosophy, unable to adjust to seeing further than its own backyard. 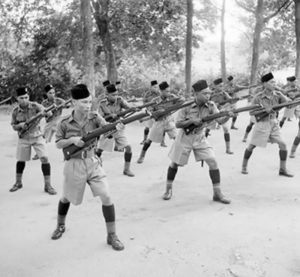 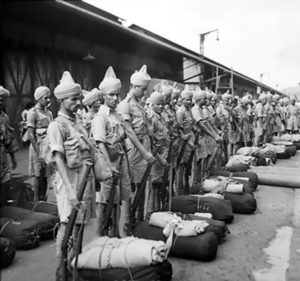 New arrivals of the Indian Commonwealth troops, November 1941. These troops were not as well trained and equipped as the British troops. 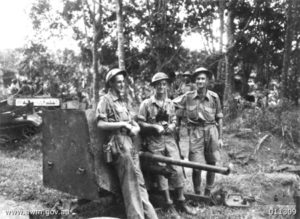 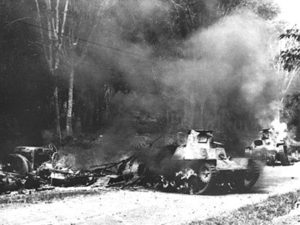 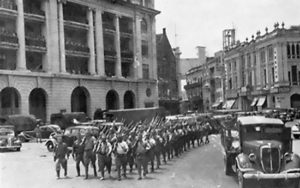