Posted on April 9, 2018 by admin in Battle Briefings

Allied Command planned on spreading their naval and air reach by first setting up air bases on the Marshall Islands, that would eventually support a naval and air campaign to take over the Mariana Islands. Only one obstacle stood in the way, and that was the well-fortified Japanese base found on Betio, the largest island sitting on the western edge of the Tarawa Atoll.

The atoll was part of the Gilbert Islands which had 16 atolls altogether, and taking over this area was essential for the Allied Forces as they moved closer on the path to Japan. Any Japanese strongholds in their way would have to be eliminated. Operation Galvanic was the invasion of Betio and, on a lesser level, the take-over of Makin Atoll 100 miles north of Tawara, both of which had been grabbed by the Japanese in late December of 1941 after the attack on Pearl Harbor.

The Japanese forces on Betio, consisting of 4,500 soldiers, led by Admiral Keiji Shibasaki, had built seawalls, a defensive trench line, and 100 “bombproof” concrete pillboxes at strategic points around the island, each housing 8-inch cannons. While Allied Command thought the island would be taken easily, it was anything but an easy take-over.

On November 20th, 1943, the invasion began first with a naval and expected air bombardment on Betio to wear down any fortification structures and reduce the enemy. On hand were the USS battleships, the Maryland*, Tennessee, and Colorado, which had been damaged in the Pearl Harbor attack, then repaired, refitted, updated, and were now exacting revenge wherever they were needed. Supporting them, along with nine other battleships were 17 aircraft carriers, eight cruisers, 66 destroyers, 36 transport ships, along with a supply fleet. The total of troops was 35,000.

At Tarawa, as the bombardment began, the Maryland, using one of her 16-inch armor piercers, hit a Japanese ammunition room next to a pillbox housing 8-inch cannons and blew up both structures up, killing over 100 soldiers, and destroying everything around it. It was considered one of the greatest bombardment hits by a USS battleship in WW II.

When the naval bombardment subsided so that the smoke could clear out for the air bombardments, the first wave of 5,000 U.S. Marines (out of 18,000), headed towards the shore but the neap tide had not risen high enough for many of the landing crafts to get over the coral reefs. Soldiers began making their way through the chest-high water onto shore amidst heavy fire, while boats stranded on the reefs were bombed from the island. Those men moving through water, lost their radios to water damage along with other vital gear, and were exhausted by the time they made it to shore.

Other soldiers were luckier if they were in amphibious tractors (amphtracs “Alligators”) as these crawled effectively over reefs and barriers. But once they reached the beach, then they came under fire as they tried to unload. Meanwhile, the expected overhead support had not shown up yet. The naval bombardment started up again, and then the air support finally showed up.

On the north shore of Betio, there was a long pier jutting out past the coral reefs and the amphtracs were getting caught up there. Defenders had moved closer and were firing from either side of the amphtracs, leaving the marines stuck in their transports. One marine, Corporal John Joseph Spillane, formerly considered for the baseball teams as a pitcher, pulled off multiple miracles. As defenders threw grenades into his craft, he would pick them up and throw them back out again. He even caught one in the air and threw it back out. His actions saved many men that day and took out many Japanese fighters, but lost his right hand to the event when one exploded as it left his hand.

The highest cost of soldiers killed, occurred in the first day, at 1,500. The next day saw the neap tide still in effect, although it finally rose high enough by noon, finally allowing destroyers to move in closer and add bombing support as landing crafts moved in quickly and offloaded the marines. By the end of the second day, all the Japanese posts had been obliterated and the western section of the island was under control by the U.S.

One the third day, more heavy equipment was offloaded and the Japanese were now pushed back east of the airstrip on the island. The rest of the day was spent consolidating offenses throughout the island. On November 23rd, the aircraft carrier, Liscome Bay, was sunk by a Japanese submarine, with a loss of 687 souls, 30 percent of all losses in this battle.

By the end of the battle on Betio, only 17 Japanese soldiers were left alive. Many strategic lessons were learned from this battle, along with redesigning radios to be waterproof so communications could still be kept in place.

*Aside from Tarawa, the USS Maryland saw action at the battles of Midway, the assault on Kwajalein, the Marianas Campaign (Saipan), the invasion of Peleliu, battle of Leyte Gulf, and the invasion of Okinawa, before finally returning American servicemen home after the war ended. 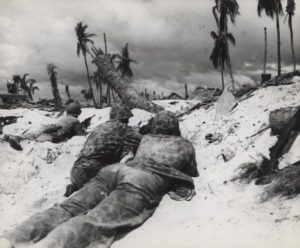 United States Marines shortly after landing on the beach at Tarawa, November 1943 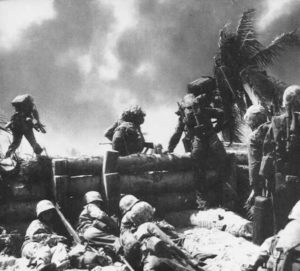 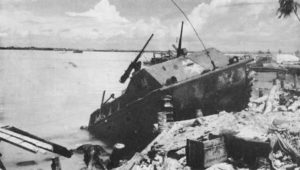 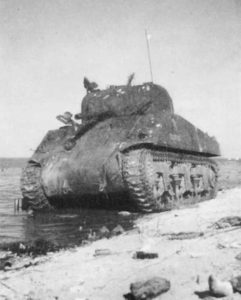 Knocked out American Sherman medium tank on the beach, November 22 1943 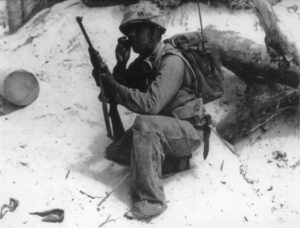 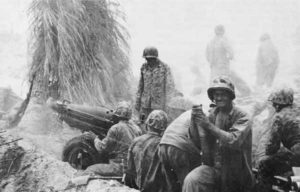 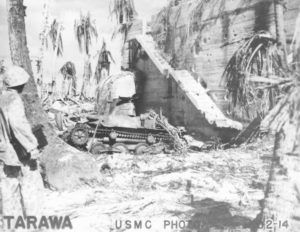 ← Battle of Singapore 1942
Infantry Weapons and Their Effects →