World War II at a Glance – Yours FREE! 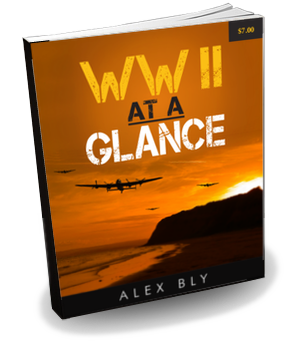 Fill in your name and e-mail, then click Submit to download your FREE Special Report, World War II at a Glance (cover price: $7 – yours FREE). You’ll get an exclusive briefing on some of WWII’s key initiatives including: underground resistance groups in Europe … Enigma, other rotor-based coding machines, and the U.S. Navy code breakers … the 5 most important intelligence groups operating during the War … the little-known reason why the Japanese attacked Pearl Harbor … the B-25 bomber raid on Tokyo… the 1944 attempted assassination of Adolf Hitler …the WWII sniper who racked up a record 542 confirmed kills all in one year, without using a scope… the top Allied spy of WWII … Kamikaze and Blitzkrieg attacks … and more.

You’ll also receive a free subscription to our sporadically published World War II e-newsletter, The Battlefield. Each issue gives you some of the most fascinating history, stories, and facts about military hardware and battles of the Second World War plus news of special offerings for WWII buffs only.