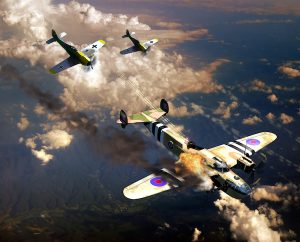 World War 2 was the most deadly conflict in human history. It would claim the lives of over 60,000,000 people. These would range from active combatants to victims of bombing, starvation and war crimes including The Holocaust. Countries such as Germany, Japan and the Soviet Union would be responsible for the majority of the war crimes while many countries in Western Europe and North America committed almost none. Nearly every country in the world was involved in some way. Europe, Asia and Africa were the continents that saw the most of the war. Some of these countries would suffer massive civilian casualties such as the Soviet Union, China, Germany and Poland. Others like the United States, Canada and Australia remained almost untouched. Britain would be bombed during the Blitz but unlike France would never be occupied by Germany.

“My daughter is a Sophomore in high school and has been studying WWII in her history class. She had a test yesterday, and to help her review, I had given her the link to your website. She took the WWII IQ test, read some of your articles and looked over several pages of the site along with her class notes. She said there was even MORE info and detail on the site than she had in her notes, and after taking her test she came home really confident about how she did!
Just wanted to share that with you, and thank you for creating this great resource.”
–JV