As World War II began in 1939 on the European continent, Prime Minister Neville Chamberlain of Britain continued his pre-war stance on appeasement, that keeping Germany and Adolf Hitler on friendly terms, would avoid any move by Germany towards full-out war with Britain. Chamberlain had signed the Munich Pact (1938) with Hitler, that allowed Czechoslovakia to be taken over by Germany, but would prevent any further invasions of European countries.

This appeasement strategy was short-lived, as Germany invaded Poland in September 1939, and Britain promptly declared war on Germany. When Germany occupied Norway in April 1940, and then invaded Holland, Belgium, and the Netherlands on May 10, Chamberlain lost what was left of his support in the House of Commons that same day, and he resigned.

Winston Churchill, First Lord of the Admiralty, who had strongly opposed Chamberlain’s appeasement strategy from the very beginning, and was highly popular with the British people, became Prime Minister on May 10 and, at once, set the tone for how Britain now viewed its relationship with Germany. Churchill declared that the British people would resist an invasion at all costs and would never surrender to the Germans. The gloves were off and Britain prepared to defend itself.

On June 17, 1940, after France was invaded and defeated by Germany, the French signed an armistice, pulling themselves out of the fight. The German forces were now close enough on the northern coastlines to launch an invasion over the English Channel. Britain, however, had highly-trained fighter pilots, a well-planned air defense network (Dowding System) in place, and experienced air battle strategist, Air Marshall and Commander in Chief, Hugh Dowding, leading the Royal Air Force (RAF). At his disposal, were the RAF’s Hawker Hurricanes and the Supermarine Spitfire planes. The Germans, who suffered massive naval losses in the taking of Norway, had no available options for conducting amphibious operations, no navy to speak of, and the Luftwaffe (air force) had also been heavily depleted in earlier campaigns.

Added to that, there was very little available reliable intelligence on British defense strategies, except for locations of radar positions and locations of the RAF air bases. The only way that Germany could mount Hitler’s planned “Operation Sea Lion,” a coastal landing and ground invasion of Britain, was to first take out the RAF, its radar sites, and the air bases with its planes on the ground. Even while hoping that the British would want to make a last-minute deal for peace, for the rest of June and into early July, the Germans built up their air force resources on both the French and Belgium coastline airfields.

On July 10th, 1940, the first of several strafing attacks by air began, with hits on British coastal towns, on convoys in the British Channel, and on the port of Dover, all the way to Plymouth. During this first attack, the Germans presumed that the British RAF resources would be moved down closer to the coastline for defense purposes, and this would become the target for the second attack. By the first week of August, the Germans had now fully reinforced their attack forces with 1,015 bombers, 346 dive bombers, 933 fighter jets, and 375 heavy fighters. The battle from the air intensified on August 5th.

A second German air attack began on August 13th and the goal was to take out any air fields, planes, and known communications centers, creating an open path for the planned bombing of London. As the battle progressed, however, the Germans realized the RAF was still very active. Dowding had wisely moved part of his air command to a different area where the Germans did not expect them, and seven RAF squadrons from the northern coastlines, met the Germans in a separate battle from the southern coastline. Thirty German heavy bombers, carrying four-man crews, were taken down, while the British suffered only two pilots injured.

But, on August 31st, Dowding’s Fighter Command (one part of three in the RAF) suffered the most losses to date. The Germans, thinking that they had wiped out the RAF, changed tactics. The German landing operation, Sea Lion, was put aside in favor of a more intensified bombing attack on London, which began on September 7th, and is historically noted as the beginning of the Blitz, overlapping the Battle of Britain. While there was serious damage sustained to buildings and residents, Britain’s defenses rapidly regrouped and were ready for the next round, which occurred during daylight on September 15th. This time, the Luftwaffe was severely repelled and suffered massive losses that depleted their forces.

Meanwhile, the RAF’s Bomber Command conducted night raids along the French coast where Germans had prepared barges for crossing the channel and targeted German land installations, severely reducing German capabilities for resupplying its forces. Historians view this battle as ending on October 31st, 1940, but the Blitz (blitzkrieg), starting in September 1940, overlaps the Battle of Britain timeline, which gave Britain the win against the Germans.

The Blitz, which lasted until May 1941, was a continued barrage by the Germans from the air on London, and other British cities and towns, yet they were never able to prove sufficient air dominance over Britain to conduct an invasion. Aside from the loss of life and injuries sustained by the British people, the bombing of Coventry Cathedral (named St. Michael), along with a sizable part of the city, was a notable and somber event. The cathedral was left in its damaged state as a memorial to all those who gave their lives during this time. There is now a new St. Michael’s Cathedral in Coventry, while the original remains in place as a monument. 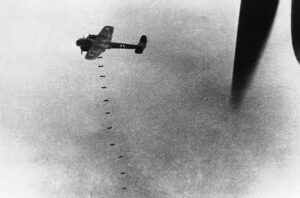 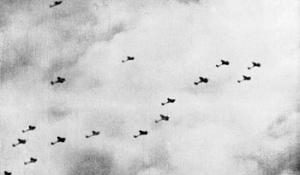 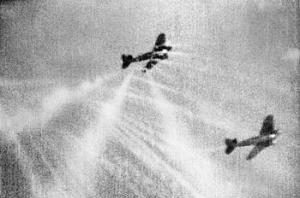 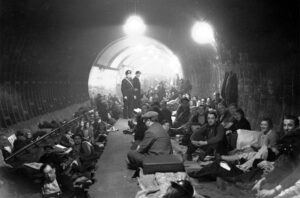 Londoners spending the night underground in the safety of the subway tunnel so they won’t be killed by German aircraft during the “Blitz”, October 8 1940