In the time leading up to Operation Barbarossa by the Germans against Russia, Stalin, who had purged many of his experienced Soviet officer corps in earlier years, was already in a state of paranoia about perceived threats from within his staff, and refused to believe many of his intelligence spies when giving information about an impending invasion. He believed it was all western propaganda and many in his spy network were also recalled and purged. Hence, when the invasion started, the Russians were caught somewhat unprepared even though they had heard rumors of a potential invasion. They just did not know when it would happen.

As the German troops of Operation Barbarossa invaded Russia in June of 1941, Hitler made a change to one of his strategies by moving extra troops south towards Kiev in the Ukraine, where most of Russia’s Southwestern Front of the Red Army had gathered in and around that city. For Hitler, it was a two-point decision: remove the potential threat against the Army Group Center heading towards Moscow, and conquer the industrial centers of the south around Kiev. It was not a popular decision by his front-line generals, as driving towards Moscow had been the main object of the invasion. Of major concern for the generals was the originally planned schedule, based on the upcoming winter weather and keeping that drive alive and moving forward.

Meanwhile, in Russia, Marshal Georgi Zhukov, chief of the Red Army’s General Staff, laid out a case for moving the Southwestern Front away from Kiev to a point behind the Dnepr (Dnieper) River, thus sacrificing Kiev for the time being, but keeping the Red Army safe from being overrun. Stalin’s response was an explosive refusal to such a suggestion, much like Hitler’s blindness to logical advice from his generals about pursuing the Moscow drive instead of going south.

Upon Zhukov’s request to be relieved of his post as chief of General Staff, Stalin then sent Zhukov away to oversee the Reserve Front. What came next would prove to be the worst disaster of World War II for the Russian Red Army, and a major, though short-lived, win for the Germans.

The German Army Group South moved quickly toward Kiev, taking Vinnytsia and Lviv along with anything else in its way. Occasional tank battles engaged each other, although the German Panzer III and IV tanks without the proper fitted guns to pierce the T-34 Russian tanks, could only immobilize them by firing on the T-34 tanks’ tracks. The Panzer III versions armed with the 5 cm gun could also stop them at medium range. It took strategic maneuvering to cut off Soviet divisions from each other and then surround them to take them out. The Germans also took over the fuel depots after the battle at Dubno and continued towards Kiev.

The Russians at Kiev, under the 26th Army’s General Fyodor Kostenko, built an 18-mile anti-tank series of trenches along the Irpin River, with the help of 160,000 Kiev civilians mustered by Commissioner Nikita Khrushchev. It was a desperate attempt to save Kiev and it did stop the German Panzer division, but only for a short time. The German XLVIII Panzer Corps moved west and south, while the III Panzer Corps went east, beginning the encirclement of the remaining Russian forces and civilians in and around Kiev. The Russian fought hard against the Germans, making them earn every step gained towards Kiev. About the time that the Germans were preparing to move on Kiev, Guderian’s II Panzer Group arrived to reinforce the German army. The German army began isolating groups of Russian soldiers to break up any chance of them regrouping into larger groups that could become problematic again.

The German forces made entry into Kiev, moving along each street and demolishing Soviet strongholds with the low-riding StuG III armored vehicles, fitted out with the short-barreled 7.5 cm KwK37 L24 tank guns. They were accompanied by infantry using flame-throwers and demolition charges that took out anything left over. After several days of heavy fighting, the city finally surrendered on September 19th, 1941. As a parting shot to the Germans, those Russians who escaped, left booby traps around the city, and detonated them remotely, killing many German officers in hotels, as well as other personnel around the city. Isolated attacks continued sporadically over the next month or so, but finally that ended as well. The battle of Kiev was noted as being the largest encirclement of troops in military warfare history. 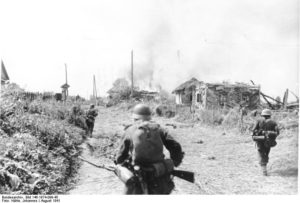 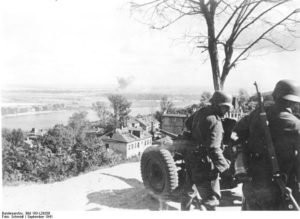