In 1941, Sevastopol was a thriving naval port on the Black Sea coastline, and not even in Hitler’s plans for a conquest as part of the Operation Barbarossa southern branch of invasion. The plans changed rapidly when in June 1941, two Soviet bombers took off from Sevastopol and destroyed 11,000 tons of vital oil reserves at the Ploiesti oil fields in Romania. Colonel General Erich von Manstein, the commander of the LVI Panzer Corps headed for Leningrad, was immediately sent to the Army Group South, to command the 11th Army in southern Ukraine. His goal, as dictated by Hitler, was to capture the Crimean Peninsula, including the naval base at Sevastopol.

Without his usual tank resources, Manstein utilized siege tactics, such as heavy sustained bombardments and then sent in infantry divisions to take out what was left along the way. The grueling path to Sevastopol went through Perekop, Chongar, Arabat, and the Ishun Lakes, crossing over small bodies of waters, and the Germans met rugged resistance every step of the way. When Ishun was taken, the Russian 51st Army retreated to Sevastopol, and this event began the siege of that city and fort. Taking the fort and city proved to be far more difficult than predicted, however.

Commanding the Soviet armies were Vice Admiral Filip Oktyabrsky, Major General Ivan Petrov, and Major-General Petr Morgunov, wily opponents who managed to plug holes wherever they came up. The surrounding geographic defense of Sevastopol that included heavily fortified hills and ravines, forced the Germans to always be moving uphill, facing machine-gun and rifle fire from hidden fortifications, mortars, and bombardments from ships on the coastline.

Even so, there was not enough concrete bunker fortifications in the hills, as, for decades, it had traditionally been thought that any external attacks would come from seaside. The only chance the Russian command had available for staying in the game, was to keep bringing in more soldiers by sea (388th Rifle Division), including recruiting sailors, the Soviet Naval Infantry, and any local citizens to help with fortifications and repulsing Germans attacks.

Meanwhile, at Feodosiya, Soviet Lt. General Vladmir L’vov courageously landed 5,000 soldiers from the 51st Army on December 26th, 1941, with another landing of 23,000 soldiers of the 44th Army on December 29th. A tank battalion was also included, and this large reinforcement caused the Germans to stop and deal with the newcomers there, before moving further on Sevastopol.

By now, both sides had suffered large losses by the end of December 1941, with the Germans incurring 8,595 casualties, while the Soviets lost 7,000, with another 20,000 captured. Fighting continues throughout the next few months, with the Germans taking Feodosiya in January 1942. In May of 1942, beginning with Operation Trappenjagd (Bustard Hunt) that would clear out the Kerch Peninsula, the Germans started with a 10-minute artillery assault, destroying the Russian lines, and then landed 902nd Assault Boat Command and 436th Infantry Regiment behind what was left of those lines.

On June 2nd, 1942, the Germans implemented Operation Sturgeon Catch, which was a three-prong attack from land, sea, and air, The Luftwaffe 8th Air Corps, commanded by General Wolfram von Richthofen, had 600 air craft with medium bombers, dive bombers, and torpedo bombers. The Corps flew 23,751 sorties and dropped 20,528 tons of bombs on, and around, Sevastopol. The Italians also gave naval help, while the German infantries moved in after the bombing stopped.

On June 13th, the LIV Corps took over Fort Stalin (concrete bunkers) after a heavy one-hour battle with the defenders. Next, Fort Lenin was taken on the 21st of June, and Fort Konstantinovsky captured on June 23rd. It was now a series of dominoes falling one after the other. On June 30th, Moscow finally ordered Sevastopol to be evacuated, but it came too late for many soldiers. Soviet officers and commanders were evacuated by boat and submarine in full view of their soldiers, although some chose to stay with their men. 23,000 soldiers, with many of them injured, were left in the city to await their fate. Of those evacuated, only 25,157 were successful, while some boats were bombed by German planes before getting away.

The final epitaph of the fall of Sevastopol was that after the Germans took Sevastopol, any Jews found were rounded up and executed. This continued for the next two years until the retaking of Sevastopol by the Russians (Soviets) towards the end of the war. 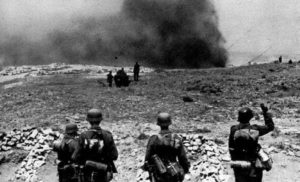 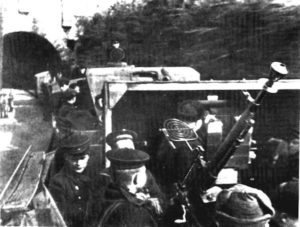