In World War 2 there were four main types of anti tank weapons. Each of these three were mainly designed to destroy against armored vehicles. They had various ranges and firepower. Some could be lifted by a man while some of the larger ones needed to be towed.

The first type is the anti-tank rifle. These are large rifles with a large caliber bullet mean to destroy armored targets. These were generally greater than .50 caliber but not larger than 20mm. They could be carried by one man but were fired while in the prone position. These weapons were not powerful enough to destroy medium and heavy tanks but could destroy non-armored vehicles and lightly armored vehicles such as half-tracks, armored cars and light tanks. The Polish kept their version of the rifle a secret before it was used to deadly effect. Because all the German tanks in 1939 during the invasion of Poland were not heavily armored the Polish were able to use their anti-tank rifle very effectively. Some examples include the Polish Wz. 35, British Boys, And Soviet PTRD-41 and PTRS-41. 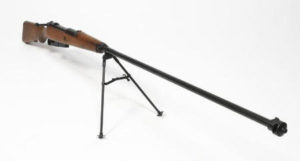 The second types of anti-tank weapons are man-portable anti-tank rocket launchers. These are extremely similar. A crew of two used these. One would aim and fire the weapon and the other would load the next round. These were more powerful than anti-tank rifles. They were mainly defensive weapons and not to chase down armor. These could not be fired indoors because they had a huge back blast, which was dangerous. Anyone standing in an enclose space or directly behind this weapon when it fired could be seriously injured. Some examples are the American 2.36 inch (60mm) bazooka, German 3.5 inch (88mm) Panzrschreck. Another weapon very similar was the German 60mm Panzerfaust. It was slightly different because it could not be reloaded. This weapon was a one shot disposable tube launched weapon. It had an even closer range but was very deadly. It could be used by just one infantryman. 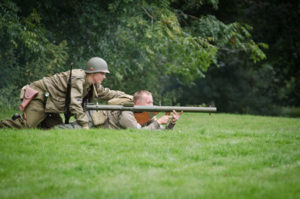 The third is the anti-tank gun. These were large guns on wheels that had varied in size and firepower more than any of the other types. Some were very small like the American M3 37mm and could only destroy light tanks. Others like the German 8.8cm Pak 43 were capable of destroying almost any tank. Some other examples include the Soviet 76mm M1942 Zis-3 German 7.5cm Pak 40 and British 6 QF 6 Pounder. They had gun shields that would protect the crew of the gun from small caliber fire. 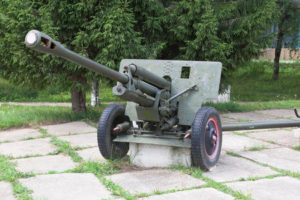 The fourth were self-propelled meaning that they were the main gun of an lightly armored vehicle making them more portable but more expensive and less simple to produce. These would become known as tank destroyers an example of a self-propelled version was the German Marder II that mounted the Pak 40 as its anti-tank gun. 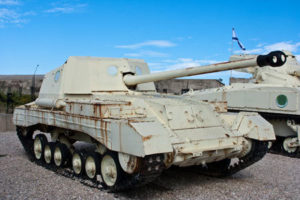 All of these weapons were designed to destroy armored vehicles. However they could be fired at infantry. They would be very effective at destroying buildings with the exception of the anti-tank rifle because it did not produce an explosion. The first three are mainly defensive but the self-propelled gun could be used offensively because it was mobile and fast enough. This made it excellent for hunting tanks.