Posted on December 6, 2016 by admin in Battle Briefings

In December of 1944, Adolf Hitler decided to make a last-ditch effort to wipe out the Allied forces. By this time, after the ill-fated attempt to kill Hitler, which was conducted by a few who were closest to him, Hitler was listening to only two of his most trusted military commanders: Field Marshal Wilhelm Keitel and General Alfred Jodl. The rest were left out in the cold. Under these circumstances, it was also hard for the Allied command group to even comprehend what was going on in Hitler’s mind. When the German forces began settling in on one side of the Ardennes Forest, opposite from where several weary Allied divisions were stationed, Allied Command assumed that the German forces were just resting and waiting for something better. General Eisenhower was advised accordingly by others in command: Major General Harold R. Bull, and Major General John F.M. Whiteley, backed by Chief of Staff, Lt. General Walter Bedell Smith. What would later be described as a ‘failure in intelligence’ communications on a grand scale, ultimately, resulted in the second bloodiest war since World War I and the Meuse-Argonne battle.

In the early morning hours of December 16th, 1944, three German armies, comprised of some 2.5 thousand soldiers, moved their way through the Ardennes forest, navigating trees and rugged roads, and engaged the four divisions of American soldiers, who were caught totally unware. One such division, the inexperienced 106th Division, was almost totally destroyed, yet was able to put up enough of a battle to gain time for defenses to pull together at St. Vith. Under the leadership of Brigadier General Bruce C. Clarke, the Combat Command B, 7th Armored Division, was able, for six days, to hold off the Germans from taking St. Vith, a crucial objective for the Germans, because of St. Vith’s railroad and communications center. On the sixth day, the US Army, having suffered great losses, finally withdrew to Salm River, but the Germans had also suffered tremendous losses, including lack of vital replenishments. It was later determined that this battle at St. Vith, was a major turning point against the Germans’ closely-timed plan to divide Allied forces and break their will to fight back. The final objective for the Germans was to roll through to Antwerp, Belgium, but now their time table was off by three days.

Meanwhile, Allied Command was quickly shoring up defenses along the way, and building a counteroffensive. The 99th Division Artillery Group were hunkered in around Monschau, while the 2nd Infantry Division was on Eisenborn Ridge, thus fighting off any German advances towards Liege at the south-eastern border of Belgium. The 4th Infantry Division were also in play in this area. Further south, the 101st Division, now located at Bastogne, was in danger of being surrounded by the XLVII Panzer Corps, which had not experienced delays. While the Panzer Corps was initially supposed to pass Bastogne and head towards the Meuse, the commander unwisely informed his commanders that they should commit there first, thus interrupting the timeline. When the German commander on December 22nd, demanded that the American forces in Bastogne should surrender, Brig. General Anthony C. McAuliffe said “Nuts!” right back. As the weather broke on that day, supply airdrops were made to Bastogne, and the 4th Armored Division broke through to assist Bastogne. The bulge of the German army’s push (hence the battle name) was the strategic spread outwards of German forces against the Allied front line, from the Ardennes, to various points in south-eastern Belgium.

The battles, particularly at St. Vith, were bloody and hard. As the Germans became bogged down in numerous positions, more battles ensued. The German panzer army spearhead finally reached 20 miles outside of Liege, but was stopped there by the Allied counterattack. The Germans finally backed away in January of 1945, and the Battle of the Bulge finally ended, January 16th, when Allied task forces from the north and south, met up at Houffalize. In all, some 76,890 US soldiers were killed, missing, or wounded. It should also be mentioned that Belgium citizens tended to American soldiers as best as they could, and also suffered during this time. 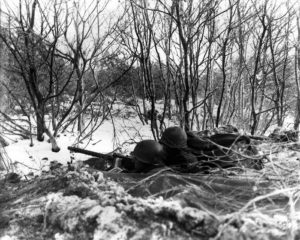 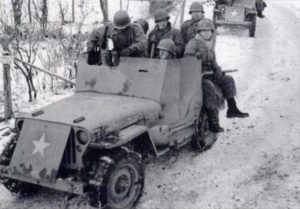 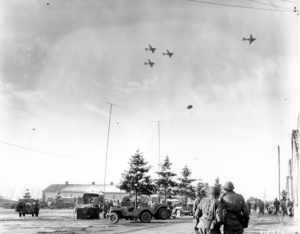 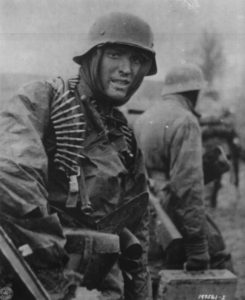 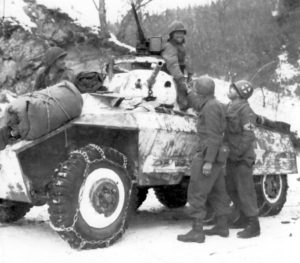 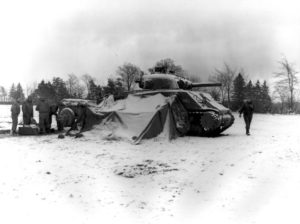