Posted on December 9, 2016 by admin in Battle Briefings

After Allied forces defeated the Axis German and Italian forces in Africa in 1943, the Axis forces retreated through Sicily, crossed the Strait of Messina, and moved into Italy to the Po Valley. From here, the Germans planned to hold the northern industrial section of Italy. Operation Husky (July 10 to August 17, 1943) was conducted with the invasion of Sicily and was achieved in 38 days, with heavy fighting against the Axis forces. On July 24th, as a consequence of Operation Husky, the Italian Fascist Dictator Benito (Il Duce) Mussolini was voted out of power, and then arrested. General Pietro Badoglio was made Prime Minister, whereupon he began arranging armistice terms with the Allies. Italy surrendered unconditionally on September 8th, and on October 13th, Italy declared war on Germany. Meanwhile, Mussolini was rescued by the Germans and he set up a puppet government in northern German-occupied Italy with his own groups of fanatical Fascist counterinsurgents.

The Invasion and Liberation of Italy Begins

On September 9th, one day after Italy surrendered to the Allies, and Italian armies were disarmed by the Germans, General Mark Clark (5th Army) ordered Avalanche to begin, using the US VI Corps and the British X Corps. The British (46th and 56th Divisions) landed on the northern point, while the US troops (36th Infantry Division), landed further south of Salerno. The landing points were covered by US Army Rangers and British Commandoes, who would secure the Sorrento Peninsula mountain passes, as well as block any reinforcements coming from northern sectors. However, the X Corps endured heavy attacks, until finally, reinforcements arrived, along with naval gunfire which drove the Germans back. Simultaneously, the port of Taranto (Operation Slapstick) was easily taken over by the 1st Airborne Division and 78th Division of the British Army, but later on the 11th, suffered damages to cruisers, when the Luftwaffe attacked with bombs.

The Allied forces began moving north, taking Foggia on September 27th, and Naples on October 1st. Meanwhile, the German forces under Field Marshal Albert Kesselring, retreated backwards, but leaving infrastructures of hazardous mines and demolitions. During this time, ground and supply reinforcements to the Allies were also slowed down by the concentration of power, put to the 15th Strategic Air Force and bombing campaigns.

After progressing forward and taking Volturno, Trigno, then Sangro, the Allies were halted at Garigliano, where Kesselring finally stopped to take a stand. On January 17th, the Battle of the Garigliano (river) began, and on January 22nd, the VI Corps, comprised of 50,000 US soldiers and British troops, in a surprise maneuver, landed on the Anzio beaches, but did not move further to cut off Kesselring from behind. This left him the opportunity to build up troops, thus prolonging the battle exponentially. Allied forces also conducted three separate battles on Cassino and its Monastery Hill, upon which stood an abbey, a prime location for observation posts. None of these Allied attacks were successful.

Finally, the decision was made to air bomb access to roads and rail communications, thus reducing Kesselring’s supply line, and he finally withdrew north on May 16th. The Allied forces moved forward and rode into Rome on June 4th, 1944, thus liberating Rome and the southern part of Italy. The fight in northern Italy, however, was protracted further, because the Allies, under Fifth Army Commander Mark W. Clark, made the side journey to Rome, instead of chasing after the retreating German forces.

The final set of attacks, after waiting out poor weather conditions, started with Operation Encore, beginning in the last days of February, 1945. The US 10th Mountain Division crossed over the Apennines Mountains and German-installed minefields, to line up with the II Corps, and began pushing the Germans off their positions on Monte Castello, Monte Belvedere, and Castelnuovo. The 8th Army forces broke through the Argenta Gap after a large bombardment was conducted in the area, then met up with the 6th Corps close to Bologna, then captured it, along with reinforcement groups. Further take-over operations occurred at Venice, Trieste, Milan, Genoa, and Turin. When Berlin fell on May 1st, 1945, the Germans in Italy surrendered on May 2nd, 1945. 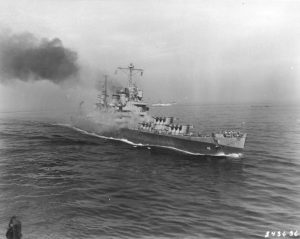 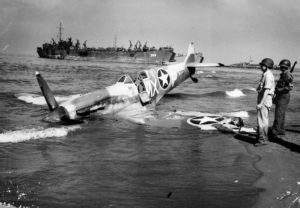 Supermarine Spitfire of the US 307th fighter squadron on the beach near Salerno after being shot down, however the pilot was uninjured, Paestum Italy, September 1943
Source: United States Coast Guard 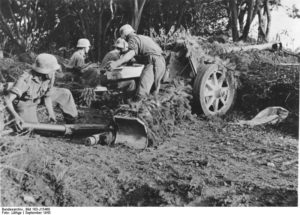