Posted on December 20, 2016 by admin in Battle Briefings

The Battle of Okinawa

The battle of Okinawa, code name Operation Iceberg, intended as the last step before the planned invasion of Japan, was fought on both land and sea. It became the last major battle in the Pacific in World War II. While Americans were slugging it out with entrenched well-armed Japanese on the island, a picket line of destroyers (DDs) and destroyer escort (DEs) vessels, kept open the lifeline of sea lanes needed to keep reinforcements coming in on a continuous basis. Kamikaze pilots, who volunteered for the honor to drive their planes into the vessels, carried roughly 3,000 to 4,700 pounds of explosives, strapped to the plane’s belly, which was then aimed at the target vessel. Added to this, were several mini submarines and speed boats, which sped to the vessels, to accomplish the same end result from sea level, aiming into the sides of the American vessels.

The Strategy at Sea

A ring of DDs and DEs were set for surrounding the island to protect the lanes and landing points on the island. A picket line point was set at 20 miles out, with a second at 40 miles out, and a third at 70 miles out. Each point had rings of picket groups, and all were named Task Flotilla 5. Each ring was assigned a fighter-director team, which connected with a specified fighter squadron, that could be called in for help. Starting out with one destroyer for each ring, more were added on over the following days, because of the fierce attacks made by planes and small vessels.

Of note was the destroyer, the U.S.S. Hadley, which joined Station 15 on the picket line. In joint operations with the destroyer Evans on April 11th, the two ships took out 50 planes and rockets in the air, in just one day. The Hadley took many hits during this battle and almost sank, continuing to fire its guns, but was finally saved by its crew before it could sink. Twenty-eight sailors were lost, and 67 wounded onboard the Hadley.

Of 98 destroyers and 52 destroyer escorts sent out, 61 were hit during these attacks. Over 5,000 sailors and crew died, while 4,800 were wounded, with 13 destroyers and one destroyer escort sunk. Vessels severely damaged were 10 battleships, 13 carriers, and five cruisers, while 47 destroyers and escorts had also been damaged. It is unknown just how many kamikaze planes and boats, including their operators were lost.

The Japanese soldiers were holed up in defense lines across the island, within pillboxes, caves, and several old castles, making it hard for the Americans to get to them without incurring casualties. The Allied objective was to capture the island’s airports, Yontan and Kadena, utilizing the 111 Amphibious Corps and the XXIV Army Corps under Lt. General Simon Bolivar Buckner, Jr. The 6th Marine Division landed on the northern beaches to the west, while the 7th and 96th Infantry Divisions landed in the southern half. Marine air groups of fighters and light bombers gave support from overhead.

Opposition, initially, was very light, and Yontan Airfield was easily captured, with Kadena captured by nightfall. As parts of the island were taken, it wasn’t until April 6th, that the first major resistance came from the embedded Japanese soldiers. The Americans had to strengthen its forces before moving further. On May 3rd, Japanese troop reinforcements landed on the wrong beach where Company B, fronted the XXIV Corps, and the two sides engaged in fierce battle, which the Americans finally won.

Alerted by this one attempt for Japanese soldiers landing on the island, the rest of the coastlines were protected from any further landings and Japanese reinforcements. The Americans, however, were still getting reinforcements. The American troops began moving throughout the island to flush out the enemy troops, engaging in bloody battles along the way. As the Americans had better training than the majority of Japanese soldiers, it was only a matter of time, until their downfall. But that still came at a cost to both sides, more so for the Japanese. On June 19th, Japanese soldiers began surrendering to the Americans by the hundreds, and on June 22nd, Marine Maj. Gen. Roy Geiger declared the island as won.

Six weeks later, two atomic bombs were dropped over Japan, one on Hiroshima, and one on Nagasaki, thus ending the war. The invasion of Japan never occurred as originally planned. 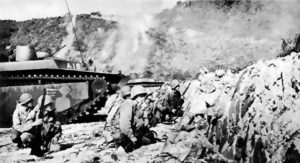 U.S. soldiers after landing from a LVT on an island near Okinawa Japan, March 27 1945 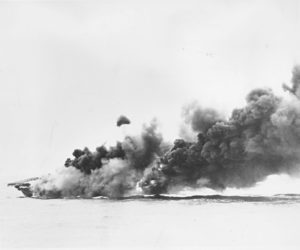 USS Hancock desperately trying to control the fire after being hit by Japanese aircraft off of Okinawa, April 7 1945 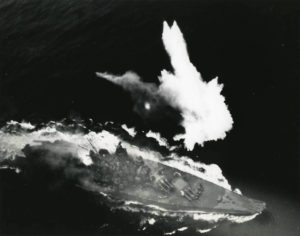 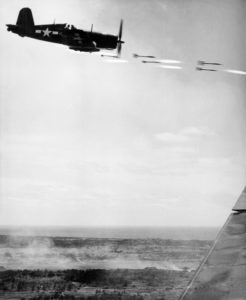 U.S. Corsair firing its rockets at a Japanese position on Okinawa, June 1945 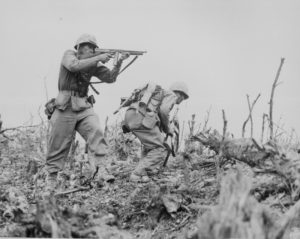 U.S. Marine aims his Thompson submachine gun at a Japanese sniper on Okinawa, April, May or June 1945 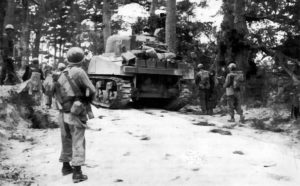 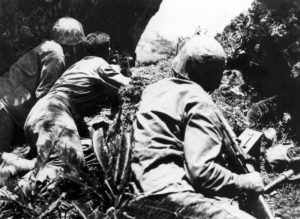 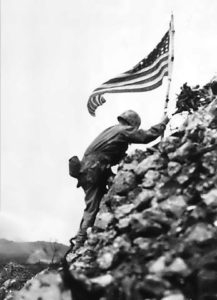 A U.S. Marine raises an American flag over Shuri Castle on Okinawa, May 29 1945