Posted on January 27, 2018 by admin in Battle Briefings

Operation Detachment, the attack on the Japanese island of Iwo Jima, was just the first step towards an attack on the island of Japan. Both Iwo Jima and Okinawa were important because the Americans needed a base from which to launch that final attack. Iwo Jima also had a radar warning system, with several small airports from which Japanese planes easily could target marine vessels. Therefore, it was vital that the island be captured. For the Americans, these airports would be a haven for any damaged B-29 “Superfortresses” bombers, who needed somewhere close by to land, or else be lost at sea. Three days before the invasion began, naval and air bombardments began on the island, in hopes of reducing the Japanese presence.

When the first Marine divisions landed on the beaches on February 19th, 1945, there was little resistance from the Japanese. But Iwo Jima was an unforgiving terrain of volcanic hardened ash and fine black cinder particles, that hindered both men and amphibious tractor vehicles (amtracs), trying to wade, or roll through it. Many amtracs got stuck on the edge of the beaches, where no traction was available and, eventually, the landing points began to back up with struggling soldiers and immobilized vehicles. The Japanese chose to wait until there was a large enough presence of American troops on the beaches, along with their immovable armored vehicles, and then they opened fire, creating a blood bath on the beaches.

There were over 21,000 Japanese soldiers hidden in a centralized cobweb of caves and corridors, similar to those at Peleliu, leading from one position to another, where attacks could take place at a moment’s notice. Led by General Tadamichi Kuribayashi, the Japanese soldiers were told that before they died on that island, they had to kill at least 10 Americans each, and they did their best to obey that order. Mount Suribachi was located at the southern end, where Japanese soldiers could see out and radio in positions to the northern end, thus setting up the concentrated firing line against those on the beaches. Once assault signal companies arrived on the scene, they were able to pinpoint where the firing was coming from, and American naval bombing became more accurate and effective. The persistent Americans continued landing on the beaches, and moving forward, until it finally became clear to the Japanese that they were outmanned and the Americans were there to take them down.

One Marine regiment headed south to strike at Mount Suribachi, and as they moved over the terrain towards their goal, they bombed and burned pillboxes, caves, and sealed up any connecting tunnels they could find. It was a brutal hard path they made with their flamethrowers, grenades, rockets, and whatever else they could use, to destroy the enemy.

After this battle, a Marine group of soldiers climbed their way up Mount Suribachi, meeting little resistance by then. They finally reached the summit on February 23rd, whereupon the Marines raised the American flag, immortalized in a famous photograph by Joseph John Rosenthal, seen in newspapers around the world. The Marine Corps War Memorial statue that is located close to Arlington National Cemetery in Arlington, Virginia, is modeled after this picture. When the flag went up, the Marines below cheered loudly and the navy vessel commanders and sailors, who had been watching the journey up the hill through binoculars, had the ship horns blown. It boosted the morale of the fighters on the field of battle and they renewed the fight to capture the island.

Another Marine group had already moved north into what was known as the ‘meatgrinder’, fighting in gullies, caverns, and on ledges, to defeat the enemy. They used flamethrowers and, when possible, tanks. They were also assisted by warship and aircraft bombings, pulverizing the terrain wherever needed, but it was mainly a battlefield conducted on foot. With the addition of another Marine division, as well as a surprise attack at night, the Japanese defenses finally fell apart, and Iwo Jima was officially won by the Americans on March 26th, 1945. The battle had been fought, inch by inch, with many lives lost. 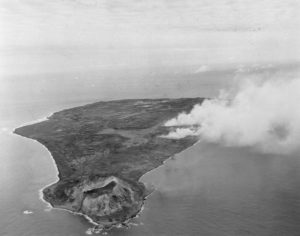 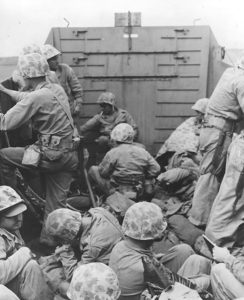 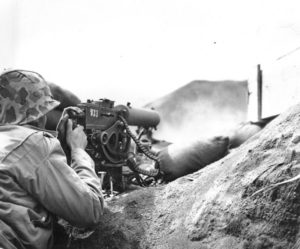 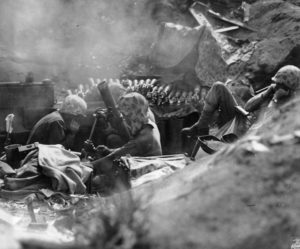 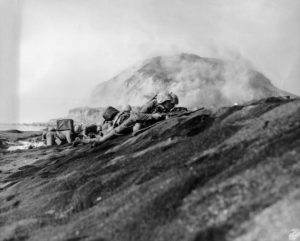 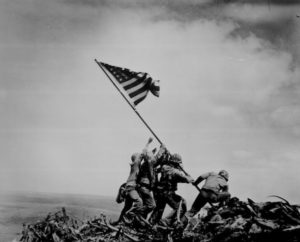