In World War 2 all troops were issued a sidearm which is a handgun that is carried as backup in case a soldier either runs out of ammunition for their main weapon or that weapon jams or breaks. Because the sidearm is a handgun these weapons are used at short range. Once a soldier was no longer able to use his main weapon often the best he could do is stay and defend himself and his brothers in arms with his short range sidearm. 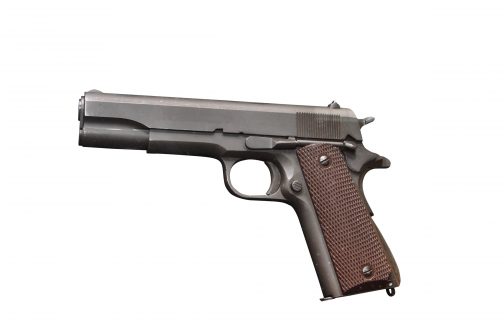 American soldiers carried the Colt M1911 .45 caliber pistol. This pistol carried 7 rounds in the clip. This weapon was also used by American troops in World War 1. Its .45 caliber round was very powerful and could penetrate thick materials great stopping power. Stopping power means how well each shot it able to stop a man coming at you. It was also very reliable and would rarely malfunction. 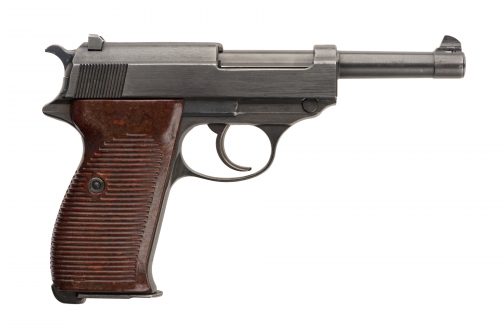 German Walther P38 9x19mm pistol with an 8 round clip

Lower ranking German soldiers carried the Walther P38 pistol. Higher ranking officers would carry the classic Luger pistol used in World War 1. It should be noted Lugers were highly valuable to any allied soldier who managed to kill a German officer or find one. The P38 used the 9x19mm Parabellum. This was a weaker round than what the American soldiers used and would not be able to penetrate as thick of materials. The P38 carried 8 rounds in the clip. 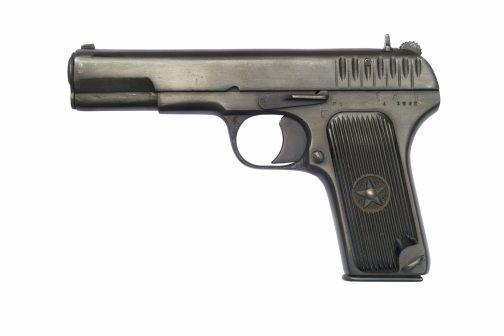 The Most modern Soviet pistol was the Tokarev TT-33. It used the 7.62×25 Tokarev round. This bullet is excellent at penetrating most objects but does not have the stopping power that the .45 has. The TT-33 has an 8 round clip. It was designed to replace the older M1985 nagant revolver but because not enough were produced it ended up serving alongside it instead of fully replacing it during World War 2. 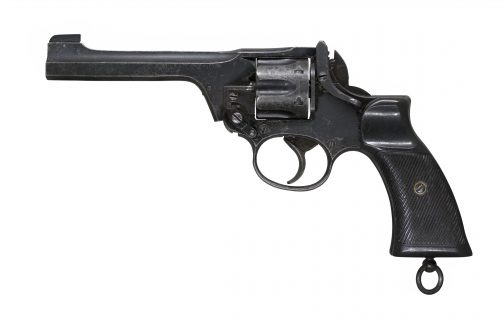 British Enfield number two .38-caliber revolver with a 6-round cylinder.

The most common British commonwealth sidearm was the Enfield number 2 revolver. This was also the most modern sidearm used by the British Commonwealth forces. It used a 9.65mm round. This revolver had a 6 round revolving cylinder. However this gun had an extremely low range of only about 15 yards.

Tankers would carry sidearms in case their vehicle was knocked out or broke down. If they survived the vehicle being hit and had to leave they would use these weapons as their last defense. Pilots would also carry a sidearm in case their plane crashed and they survived. However even though almost all American soldiers carried a sidearm not all armies could give every soldier a sidearm such as the Soviets. The Americans had no problem producing enough material for its soldiers. In many poorer and less developed countries this was not the case.