The first and most common type of hand grenade was the fragmentation grenade. After igniting the fuse these grenades would usually explode after about 5 seconds or so depending on the grenade. The soldier would then throw the grenade and it would explode killing or injuring anyone within a certain radius depending on the grenade. These were the most useful in clearing out rooms in a house or bunker. Because it was an enclosed space escaping the blast would be very difficult. The Americans used the famous Mk2 grenade. It was nicknamed the pineapple grenade because it looked similar to a pineapple. The German Fragmentation grenade was the Model 24 and unlike most grenades in the war it was a stick grenade. They were nicknamed the potato masher because it resembled the cooking utensil. It was not round like the American pineapple or the British Mills Bomb. It was long and could be thrown farther and more accurately because of the shape which allowed for a spin while throwing it. The Soviets actually used both round and stick grenades during the war like the RG-33 and F1 frag grenades. 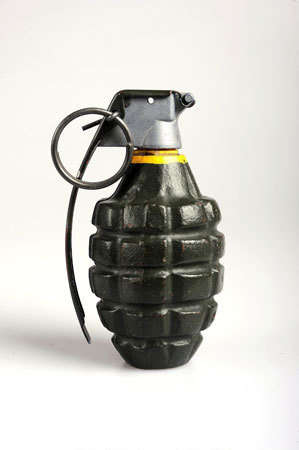 The second type of grenade was the smoke grenade. It had no harmful affects and was not a dangerous weapon. When it was thrown and it would create a white smoke screen. This was excellent in moving from cover to cover when under enemy fire. The smoke grenade was extremely useful for soldiers and extremely annoying for snipers.

The third type of grenade was much rarer. It was the anti-tank grenade and they were dangerous to use and most often not used effectively. To get into hand grenade range of a tank was extremely dangerous and difficult. Also the grenades needed to land on the tank at exactly the correct angle. The British sticky bomb would sometimes get stuck on the soldiers’ clothes who was throwing the grenade with disastrous result. Overall they were not that useful.

A fourth type of grenade was the incendiary grenade. These were often used in the form of a Molotov cocktail. A Molotov cocktail was usually an alcoholic drink but could be anytime of flammable liquid such as gasoline. It would be in a glass bottle stuffed with cloth that would be lit like a wick. This grenade would then be thrown at infantry. It could also be thrown at both unarmored and armored vehicles. These were easy to make weapons and very effective but horribly brutal.

The last type of grenade was the rifle grenade. These were grenades that would be designed to go on the end of a rifle. The user of the rifle would pull the regular trigger of the rifle to launch the grenade allowing the grenade to go farther than if was thrown. They could fire either fragmentation, anti tank or smoke grenades. The anti-tank grenades were much easier to use in the form of a rifle grenade because they would shoot farther and impact faster in a shaped charge.

← Tanks in World War 2
The Holocaust During World War II →