Posted on February 7, 2018 by admin in WWII Weaponry

In World War 2 there were three main types of artillery. All had the same purpose of bombarding and area with large amounts of explosive ammunition. This would soften up an area before an attack. The purpose was to kill some enemies, destroy equipment and fortifications. If an attack by infantry and tanks would follow the area would be in a state of disorientation and many necessary defenses would no longer be there to repel the attack. Artillery could also be used to surround an area and siege it. Artillery was not meant to be very accurate because they were used in mass and each round was not meant for a certain target.

The first types of artillery were mortars. Designated mortar men would use them to shoot an explosive shell into the air used these and it would come down on the enemy. The round was simply inserted into the tube and would fire once it hits the bottom of the mortar. There was no trigger on the mortar. The mortar generally was the smallest caliber and could be moved by an individual man. It came in three parts. It would be a long tube that shot the mortar, a baseplate to put the tube on and a bipod that the tube would lean on. Some examples of mortars used were the American M1 81mm mortar, American M2 60mm mortar, German 8cm Granatwerfer 34, Soviet 82mm-BM-37 mortar. 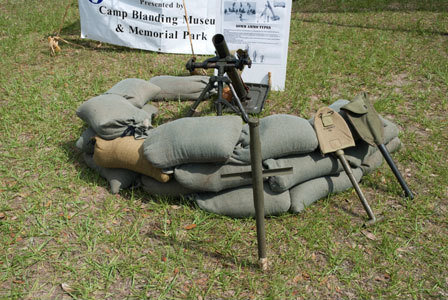 These were all based on the original design of the French Brandt Mle 27/31 81mm mortar. The second type of artillery is the howitzer. These were much larger in size and caliber of the shell. They also had a much longer range but were less portable. They were too heavy to be carried by a person so vehicles or even horses often towed them. This was possible because they had wheels. The barrels were very long so the shell had a high muzzle velocity or speed. If they happened to get very luck and hit a tank almost any tank would certainly be destroyed. Some examples are the American M101 105mm howitzer, German 10.5cm leFH 18, German 15cm sFH 18 howitzer, Soviet 1937 152mm M1937 (ML-20) howitzer. 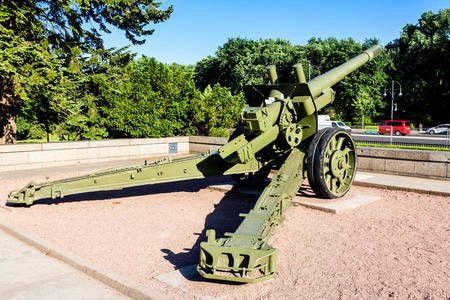 The third type of artillery is the self-propelled artillery. These are armored vehicles that have a howitzer as the main weapon. These vehicles would almost always have tracks and not wheels. Often they would also have a machine gun as a secondary weapons. These vehicles would usually stay far away like the other types of artillery. Some examples were the American 105mm M7 priest, German 15cm Hummel and Soviet 152mm ISU-152. 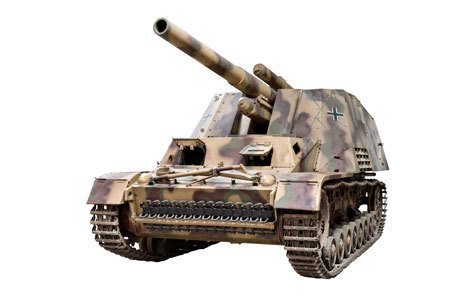 These are the main types of artillery during World War 2. There were some others like Rocket Systems but most countries did not use rocket artillery. The Soviet BM-14 and German 15cm Nebelwerfer 41. Almost all countries used the other three types of artillery especially mortars and howitzers. Artillery put emphasis on firepower, explosion radius and numbers of shells fired instead of accuracy.