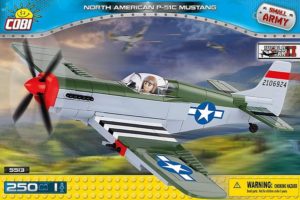 The P-51 was an American single-engine fighter plane produced in Texas and California (small quantities were made also in Australia). It was one of the best fighters of its age; it could fly with the speed of 700 kph and achieve the maximum flight level of 12,800 meters. The first combat flight the Mustang had was in 1942. Together there were about 16,000 such planes produced.

The set includes a model of the plane, a figure of a pilot and block stand. The plane has a rotating propeller, retractable landing gear, movable flaps and pilot’s cockpit which can be easily be opened to put a figure inside.