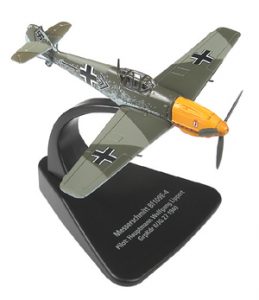 The Messerschmitt Bf 109 was the main plane of the Luftwaffe with over 33,000 built. First designed as an interceptor later models would also be made for ground attack and bomber escort missions. The Bf 109 series landed the most aerial kills of any plane during the war. This model includes a stand.