Posted on December 18, 2016 by admin in Battle Briefings

When the End Began

The Battle to take Berlin began on April 16th, 1945, with the Soviet Union marching towards the city, while the rest of the Allied forces waited out to the west, 60 miles away. By prior arrangement, the Soviets would have the right to take the city. Fifty miles east of Berlin, Marshal Georgi K. Zhukov waited at Küstrin on the Oder with 768,100 soldiers, ready to roll forward with mortars, tanks, light and heavy artillery, and multi-barreled rockets launchers (Katyushas). He had brought everything he could get his hands on, and was ready to hit at the German troops located close by. Zhokov counted down the minutes until 4 a.m., and when it arrived, an inferno of bombs, artillery, and all the revenge of the Russians, rained down on the German countryside and troops. It was the beginning of pure revenge from those who had suffered during the Germans’ previous invasion into the Soviet Union, and there would be no quarter given. Germans soldiers’ bodies were piled high, including some of the Russians who got caught by Russian bombs.

From the south, when 6 a.m. came, Marshall Ivan Konev, of the 1st Ukrainian Army Group, attacked from across the Neisse River, with nearly as heavy a bombardment as Zukov’s attack. Both Marshalls wanted the glory of entering Berlin first, so when Zukov was having difficulty breaking through the Seelow Heights, Konev quickly asked permission of Stalin to move into Berlin, as he was ready to go. Yet, as permission came, and he broke through the city’s southern defenses, Stalin gave him orders to cover the western part of the city, while Zhukov got the other side, including the prize location for the Soviet Union flag to be raised – The Reichstag.

Both Russian armies moved in, battling from street to street against any soldiers still there, along with any citizens, who could fight, while services and transportation came to a standstill, including the telegraph office. Most Germans left in Berlin, feared the retributions of the Russians for the 23 million Russian soldiers and citizens who had died at the hands of German soldiers during the invasion of Russia that started in 1941. The German defense units left to fight the Russians in the city, with no plans drawn up for the city’s defense, were close to 300,00, but mainly old men and young boys, sent to the slaughter, some against their will by death threats from the SS. , Many SS soldiers hanged any boys and others, who would not fight. As the Russians moved through the streets, they looted stores and homes, assaulted women, and destroyed everything in their path.

In the midst of the fighting in his city, Adolf Hitler was huddled in his bunker with his mistress, Eva Braun, whom he married in the last hours of their lives, on April 28th, 1945. After writing out his will early the next morning, with Martin Bormann, Dr. Joseph Goebbels, and Colonel Nicholas von Below as witnesses, Hitler later had his last staff conference, and then retired with Eva into their room. While both took poison, Hitler also shot himself in the head. Both were later found by their valet, who wrapped them in blankets, and, with the help of others, put them outside in the garden. With gasoline poured over them, they were then burned, and later covered, as per Hitler’s wishes.

The fighting continued on for several days, with Russians battling against Germans on foot with portable anti-tank weapons, along with hit-and-run attacks, particularly by boys, who were made to run under the tanks and detonate a grenade.

The End of the German Nazi Regime

Finally, on May 2nd, Berlin surrendered to the Russians, with the whole of Germany, surrendering on May 7th, 1945. The Russians had 275,000 wounded or missing, with about 80,000 killed in action. During this battle, 150,000 Germans were killed. It was after the fall of Berlin, that the truth of the Jewish extinction program was finally uncovered for everyone to see.
Stalin had asked for the right to enter Berlin first, publically, because he wanted revenge on the Germans. But there was also another lesser known reason, and that was the desire to get his hands on the Germans’ nuclear research center. The NKVD special troops, assigned to carry out this task, found three tons of uranium oxide, which they took control of, and shipped it all back to Russia. This helped shore up Russia’s own nuclear program, initiating Operation Borodino, which had been slow to start. 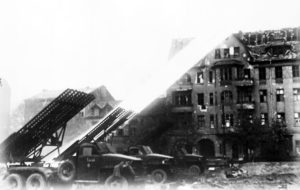 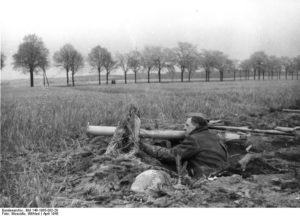 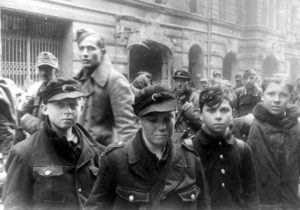 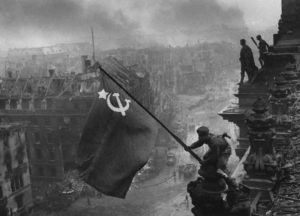 Red army soldier raising the Soviet flag over the Reichstag building in a symbol of victory, May 2 1945