German and Soviet Invasion of Poland 1939

The Preparation for Invasion

The Treaty of Versailles at the end of World War I, had decimated Germany, reducing its military to a small military ground presence. When Adolf Hitler decided he would take back much of what was taken from Germany as part of that treaty, he began the covert buildup of forces and building in secret, of planes, submarines, and vehicles in other countries in Europe. When his forces could no longer be hidden, Hitler made his first step into France, meeting little local resistance. Then, he took over control of Austria (annexed), Czechoslovakia, and after the Soviet Union, ruled by the brutal dictator, Joseph Stalin, signed a non-aggression pact with Germany, secretly giving the Soviet Union a portion of Poland in return, Hitler moved on Poland. Hitler falsely claimed that Poland had attacked first, but it was set up as an attack by Germans in Polish military clothing. On September 3rd, 1939, after the Polish invasion had begun, England and France declared war on Germany.

On the morning of September 1st, 1939, nearly 1.5 million German troops invaded Poland from the Polish-German’s 1,750-mile border, moving from the north, south, and west, towards Warsaw. At the same time, German warships and U-boats attacked as many Polish military vessels as they could find, and air strikes from the German Luftwaffe destroyed Polish airfields and planes, and bombed numerous towns. The sudden fast-paced assault would be known as a “blitzkrieg”, when adding in panzer tanks and other motorized infantry groups, which quickly barreled through any defenses put up by the Polish people. The Polish armed forces had mustered one million soldiers but there was a lack of strategy in attacking the Germans, who were far more heavily armed and organized than the Polish were. Even horse cavalry groups were sent against German tank units, and were promptly annihilated.

The Soviet Union, meanwhile, was caught by surprise at the suddenness of the attack, and scrambled to make the best of the situation, by immediately demanding its portion of Poland be turned over to them, as per the non-aggression pact. The public joint country statement was that this invasion was part of restoring peace and stability in the region, along with preparing for a new political oversight situation.

On September 17th, the Soviet Union entered Poland from the Russian-Polish border and took over its promised section, which was nearly half of Poland, including the stored resources of Ukrainian wheat and Romanian oil, which Hitler had wanted. Russia now also had control over the Baltic states as well, and all was given to them without the Russians firing a shot.

The French and the British also bore some responsibility for the devastation of Poland, in that it had not moved soon enough to stop the Germans from advancing. England and France had even advised the Polish not to mobilize it forces, thinking there could be some agreement reached with the Germans. The French, for their part, were tired of war, its fighting forces devastated in the first World War. Both countries had promised in writing that they would protect Poland from any invading forces, yet when it came, the British and the French were already too late to do anything about saving the Polish people. Both countries gave Hitler an ultimatum to get out of Poland, but when the deadline passed, all they could do then was to declare war on Germany. However, this would also prove to be the beginning of the end of France, as Hitler turned his next actions towards France and Norway in 1940. 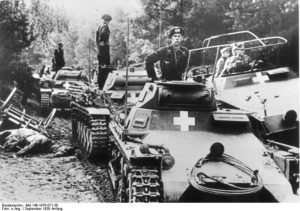 German Panzer I, Panzer ll and Sdkfz.251 armored halftrack in Poland on September 3 1939. The German officer in the halftrack might be Heinz Guderian
Source: German Federal Archive
Identification Code: Bild 146-1976-071-36 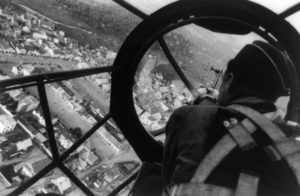 German Heinkel He 111 Bomber Gunner’s view of a Polish City aboard a German He 111 bomber, Sep 1939
Source: United States Library of Congress 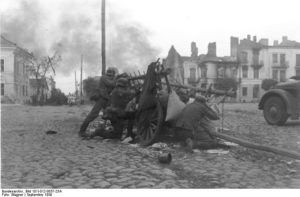 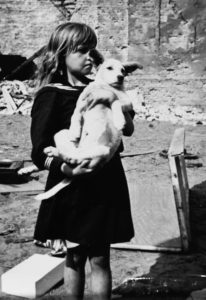 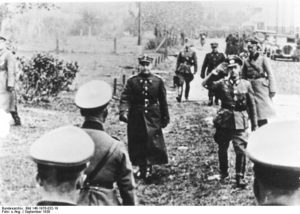