Posted on December 6, 2017 by admin in Battle Briefings

The Events Leading to Full-Scale War with Japan

Before World War II began, Japan had already begun incursions into China around 1931, with occasional localized resistance from the Chinese people. Japan, a small island with its own limited resources, planned on taking over China’s raw material resources that Japan needed, to survive. Internally, China was still in a state of disarray from the dissolution of the Qing Dynasty and abdication of its last emperor, and later, the installation of the new Republic of China government in 1912, which faced opposition from warlords. Therefore, China was vulnerable to any outside attacks.

Sun Yat-sen founded the Chinese National Party in 1912, also known as the Kuomintang (KMT), which lasted one year, and was then disbanded. After seven years of failed rule, the KMT was brought back to life in 1919 and it became the ruling party. After Sun passed away in 1925, Chiang Kai-shek took over as leader, and set about unifying China, including fighting against the newly formed Communist Party of China (CPC). Between fighting the CPC and the occasional pocket skirmishes with the encroaching aggressive Japanese military forces, it was only a matter of time before a full-scale war would break out.

The War Begins with the Shooting of a Japanese Officer on August 9, 1937

It took one small event, the shooting of a Japanese officer at Hungchiao Airport, and the incident blew wide open, leading Chiang Kai-shek to finally take on a full-out stand. The Japanese navy in Shanghai, with only 300 troops, occupied a small garrison close to the Huangpu River, which fed into the nearby Yangtze River at the Wusong Estuary. Chiang decided he would push the garrison occupants right out into the river. But, he did not take into consideration the naval and air support the fortified garrison would receive from the Japanese navy coming up the Yangtze River from the Yellow Sea close by, or the Japanese troops marching south from Beiping (later known as Beijing after 1949).

Chiang’s army of German-trained Chinese soldiers began their frontal attacks on August 11th, but did not have the larger weapons necessary to bombard the garrison, causing the KMT to suffer heavy casualties in the hundreds of thousands. The entrenched Japanese fighters also suffered heavy losses, but refused to give up.

On August 13th, 10,000 Japanese troops entered Shanghai, and fighting broke out in several districts. At the same time, the 3rd Fleet of the Japanese navy began bombarding Shanghai. On August 14th, Japanese planes from Taiwan began bombing the city as well. Many citizens began leaving the city in droves, creating chaos in the streets. Nearly 10,000 died from these bombings.

The Japanese conducted an amphibious landing, northeast of Shanghai, and fought their way towards inner Shanghai and the garrison. Both sides held as best as they could, but the losses kept rising on both sides as well.

Over the next few months, there were several notable battles in various Shanghai areas, such as the Battle of Jiangyin (August 16th to October 30th) and the Chinese blockade on the Yangtze River to obstruct any Japanese vessels from coming up the river, but it was finally destroyed by aerial bombardment and from navy ships. During the Battle of Luodian (September 11th -15th), the Chinese held the suburban town, as it was a major transportation center, but finally lost it to the Japanese. The Battle for Dachang (October 1st – 25th) was to protect the Chinese center of communications, but was also finally lost to the Japanese.

The Battle for the Sihang Warehouse (October 27th – November 1st ) was one of the most notable small battles in Shanghai, where 414 members of the 524th Regiment, 88th Division under Xie Jinyuan, holed up and planned to fight to the end, as the international community watched from afar. The warehouse stored an abundance of food, medical supplies, and light arms and ammunition, and it would be a last stand situation, geared to garner the sympathies of the west, particularly the Americans.

The Chinese defenders received intelligence from local civilians who held up signs with information, while standing on a nearby bank. Meanwhile, the Japanese cut the electricity and water lines, and attacked any vehicles bringing in supplies, donated by civilians, to the warehouse. Finally, after a very heavy Japanese bombardment, the Chinese defenders, at Chiang’s and western powers’ insistence, left the warehouse, although the Japanese shot several on the way out. This battle was the most public visual picture of the Battle for Shanghai that the western powers saw, and was an inspiration for the Chinese country.

On November 5th, the end of the Battle for Shanghai came, when a second amphibious landing took place south of the city around November, and this time, Chiang realized that they would have to retreat. By November 12th, all Chinese soldiers had exited the city, and the Japanese took over. This would be the first large battle of the Japanese against the Chinese, and took three months instead of three days, as the Japanese originally claimed it would take.

Leaders and Troops at The Battle of Shanghai 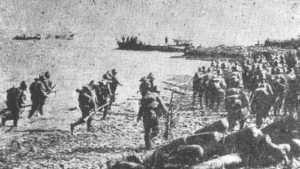 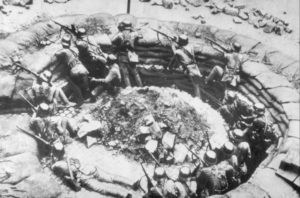 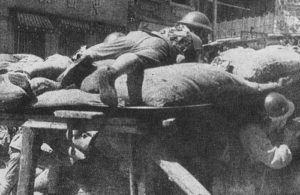 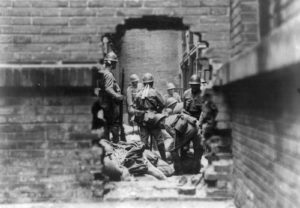 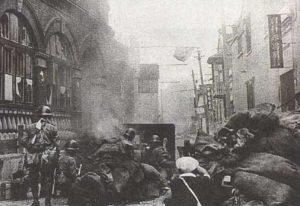 Japanese howitzer in the streets of Shanghai, August 1937 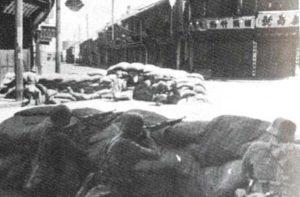 Troops of the Chinese 88th Division defending a street intersection, September or October 1937 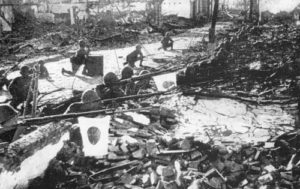 Japanese troops fighting in the streets, 1937 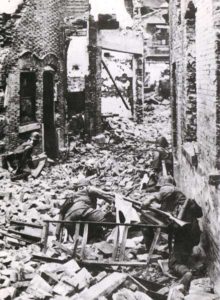