The Battle of Guadalcanal

After the disastrous attack on Pearl Harbor, Hawaii, on December 7th, 1941, and the subsequent entry into the war by the United States (US), Japanese naval fleets were put under very close scrutiny. During a US reconnaissance flight over the Solomon Islands in July of 1942, to the northeast of Australia, it was determined that the Japanese were building a soon-to-be-completed airport on Guadalcanal, and plans were made to invade Guadalcanal and several surrounding small islands across Savo Sound. The objective was to capture the airport and finish it out under Allied command. Allied planes could then take off from the island, heading out to engage, as needed, any Japanese naval fleets found in the Pacific. US troops were already stationed in New Zealand, as part of training exercises, and were quickly commandeered for this new operation. It would become the first ground invasion of the war in the Pacific, and the longest campaign. It would also be the first time American soldiers had to fight within a jungle setting.

With fair weather favoring the troops’ landing on the beach on August 7th, 1942, just northeast of the airfield, two battalions of the 5th Marine Regiment moved in and set up a cover perimeter for protection of the other troops landing right behind them. The 1st Marine Division of the 5th, began moving to the left of the airfield, while the 1st Marine Battalion of the 5th, began moving inland, to the right of the airfield. The troops found themselves in the jungle, one that caused a certain disorientation, as the soldiers trudged through steamy swamps, hacked down tall grassy overgrowth, yet met little resistance from only a few Japanese snipers. It was considered later, a strategic surprise over the Japanese, that they had no clue the Allied forces had landed. The airport was quickly taken over by the 1st Marine Division, and renamed Henderson Field, in honor of a heroic flier, lost at the Battle of Midway. The second group, to the right, had moved into Kukum, just past the Lunga River, and found no enemies left, but plenty of supplies left behind.

As supplies and more troops were being unloaded on the beach, however, the Japanese finally began fighting back with waves of fighter plane assaults on the convoy ships, just offshore. Amazingly, there was only slight damages to the ships, and none incurred on the supplies and troops on the beach. The next day brought new air assaults, and the first transport ship went down, followed in the next few days by the U.S.S. Astoria, Quincy, and Vincennes, the H.M.A.S. Canberra. The U.S.S. Chicago stayed afloat, but was severely damaged. Initially, in the following first weeks, retaliation was sparse and ineffective.

The battle for the airfield was only just beginning, and it would be brutal, as the airfield regiments had to dig in around the airfield and fend off multiple assaults. On September 12th, at what would be known as the Battle of the Ridge, located just a short way from the airfield, the Japanese attacked with heavy naval bombings, and ground troop assaults. There would be multiple back-and-forth battles over the next few weeks. The 164th Infantry arrived just in time on the 13th of October to jump into battle. The 11th Marines were an integral part of successfully resisting the Matanikau attack of Japanese foot troops, coming in behind a tank assault on the 3rd Battalion, 1st Marines.

Alternatively, on the seas, the Japanese suffered heavy naval and air losses when, in a daring unique assault, Rear Admiral Callaghan drove his force of cruisers and destroyers right down the middle of two out of three Japanese naval columns, firing from both starboard and port sides, right into the enemy columns. While his ships were damaged by the time they got through, the enemy were all turned around and firing upon each other in the dark of night. Unfortunately, Callaghan was killed during this assault.

The Invasion of Guadalcanal was, in the end, a hard-won decisive victory for the Pacific Allied Command. The Japanese were finally forced off the island by February 1943, due to their heavy losses. This battle was considered the turning point in the Pacific battle arena, and also provided the Allies with a clear lane of communications and transport between Australia and the United States. Of notable importance was the bravery and tenacity of the US Marines in holding the Henderson air field through the span of the battle over several months. 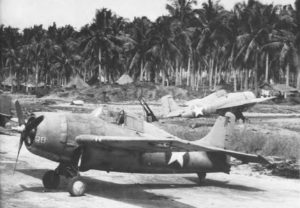 F4F Wildcat fighters of the US Navy and Marines on Henderson Field in Guadalcanal, January 1943
Source: US National Archives and Records Administration 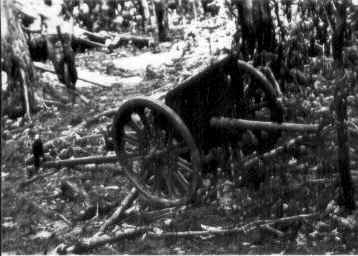 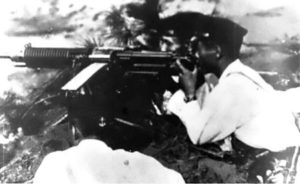 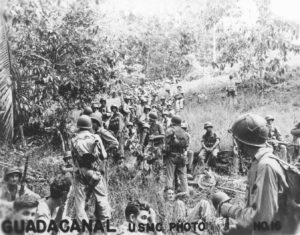 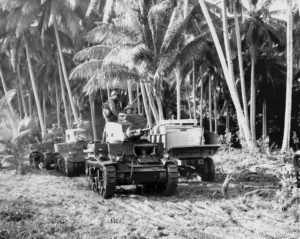 Two American M2A4 light tanks and an M3 Stuart light tank in the middle both were armed with a 37mm main gun, 1942 or 1943
Source: United States Department of Defense