The Invasion of Normandy

First suggested as an alternative approach to invading Europe during the initial Operation Husky discussions, Operation Overlord would become one of the largest operations of World War II. Unable to hide such a concentration of military assets consisting of tanks, jeeps, bulldozers, and other military equipment on the British Isles, along with 10,000 planes, the Allied Command determined that a bit of subterfuge was needed, in order to confuse the enemy. An elaborate plot was devised to indicate that the landing would occur from the narrowest point of the English Channel, to the Pas-de-Calais (Strait of Dover).

For the Germans, it was hardly a secret that an Allied invasion was coming; it was just a matter of determining where and when it would take place. As part of the ruse, Allied Command fed false information about an American army group planning to invade at Pas-de-Calais, along with showcasing fake landing craft along the British coastline. Dummy tanks were also put out in full view of German reconnaissance planes flying by. The subterfuge was so successful, that when the invasion of Normandy began, the Germans thought that this was a mere deterrent from the real invasion coming at the Pas-de-Calais.

D-Day is currently regarded as the largest invasion force in known history, with 7,000 ships and landing crafts, manned by 195,000 navy personnel from eight Allied countries, off-loading roughly 133,000 troops from England, Canada, and the United States. Five beaches, over a 60-mile stretch along the Normandy coastline, code-named Utah, Omaha, Gold, Juno, and Sword, were the focal points of incursion into the country. Hours before the land invasion began at dawn, airborne troops were dropped during the night at strategic points along the assault line, in preparation for covering the troops landing on the beaches at dawn.

The choice for using those beaches was that wheel-tracked vehicles could safely navigate the beach sand, and head for Cherbourg, the first objective for a take-down. Meanwhile, Allied foot troops would move into the countryside, where everyone would meet up, and then be reinforced by subsequent landings of more troops and military armaments. At the end of June, reinforcements consisted of an additional 850,000 men, 148,000 vehicles, and troop supplies at 570,000 tons. The Allied supply chain consisted of two pre-fabricated harbors, materials for building a railway replacement system, 20 underwater pipelines from England to France, pumping one million gallons of gas daily for transport vehicles, and use of French road systems for high-speed travel, later named the “Red Ball Express”.

Casualties of 10,300 lost, were incurred in that first day of landing, with 2,000 at Omaha Beach alone, where German defenses were heavily fortified. The Omaha operation was nearly lost, until small groups of brave men began working their way up the bluffs, clearing landmine paths and, whatever or whoever they could, along the way. The forces then were able to move in and travel to the meetup point further inland.

Tactical surprise was successfully achieved for Operation Overlord, although at great cost in the Omaha landing sites. The massive well-planned landing operation at Normandy would be the beginning of the end for the German forces in France and, ultimately, Adolf Hitler. 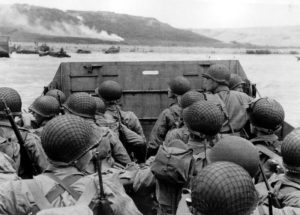 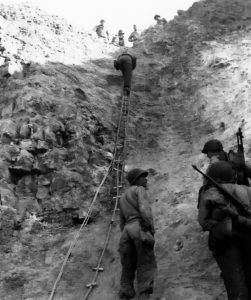 U.S. Army Rangers show off the ladders they used to scale the cliffs at Pointe du Hoc, Normandy, July 6 1944
Source: US National Archives and Records Administration 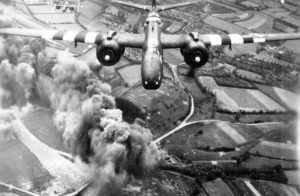 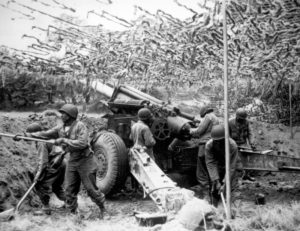 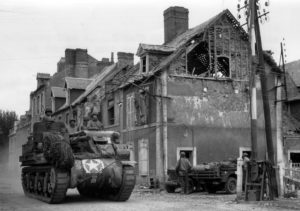 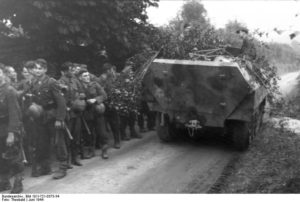 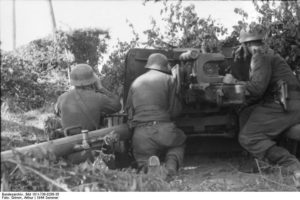 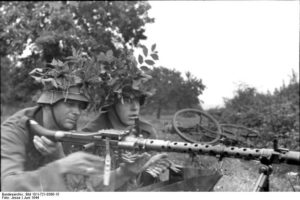