Posted on November 30, 2016 by admin in Battle Briefings

Operation Stalemate II was a simultaneous two-pronged simultaneous attack on Peleliu and Angaur. The choice of attacking Peleliu in the Palau Islands, was decided when considering the well-built airfield on that island. Once captured, the location would provide an excellent take-off point for the Allies to attack the Japanese over any surrounding islands from the air, thus neutralizing the enemy forces. There was also a smaller secondary air strip facility on the close-by island of Ngesebus. While the 1st Marine Division would attack Peleliu, the 81st Infantry Division would attack Anguar. Three days before the landings, the Navy began a heavy bombardment of Peleliu from both the sea and air, in order to reduce the Japanese defenses. Yet, what might have seemed a simple short battle in its planning, turned out to be anything but that, in reality.

On September 15th, three regiments of the 1st US Marines Corps under Brig. General William Rupertus, made the first amphibious landing and assault on Peleliu. They immediately came under mortar and artillery fire, while attempting to land on two beaches, code-named “White” and “Orange”. Once on land, the marines had to also deal with hidden honeycombed networks of linked caves and coral ridges, all while under heavy fire from the well-hidden Japanese. The 1st Marine Regiment (3rd Battalion), under Col. Lewis “Chesty” Puller, landed at the northern left end of “White” beach and was to move straight inland towards the Umurbrogol ridge. The 5th Marine Regiment under Colonel Harold D. Harris, landed at the central point of “White” beach, with the plan to move straight in and capture the airfield, after meeting up with the 1st Marines. The 7th Marine Regiment under Col. Herman H. Hanneken, landed on the right southern end to secure the south tip of the island.

Meanwhile, Company K, of the 3rd Battalion, with 235 men led by Captain George P. Hunt, was directed to capture the Point, but lost about two-thirds of his group while doing so. Just before getting to the airfield, the 1st and 5th Marine Regiments endured a vicious counterattack from the Japanese, which was finally destroyed by five Marine tanks that fired back on the Japanese lines.

On the second day after capturing the airfield, the 1st Marine Division, along with the 1st Battalion, attacked the Umurbrogol coral hills, later known as “Bloody Nose Ridge”. This was a centralized point for the Japanese to fire down anywhere on the island and it needed to be destroyed. It was a month-long battle as soldiers crawled uphill over sharp coral and limestone rocks, that cut up their clothes and bodies.

Many officers and soldiers, without sufficient cover, were killed in this uphill battle, yet “Chesty” Puller kept pushing forward, even while having to travel on a stretcher because of injuries. Air support dropped napalm and shot bombs wherever they could find the enemy holed up in the hills. Above ground, Marines fought with coral rocks, bayonets, and fists when nothing else was available. The area of heaviest fighting with the Japanese was called the Pocket.

When Major General Roy Geiger finally determined that the ridge battle was at a stalemate and having lost too many lives, he called in the 321st Infantry Regiment from the 81st Division at Angaur to take on the battle, beginning a new phase altogether from original plans.

The 321st Infantry now moved parallel to the Umurbrogol hills, with the 5th Marines passing through the troops, heading north to clear out the island’s tip, then over the causeway connecting Pelelui to Ngesebus island. Once there, the Allies conducted an amphibious assault, along with tanks and Marine air support, taking over the airfield there and, later, the whole island. Once that was cleared out, all troops were focused on the Pocket, until the Japanese were finally taken out.

What was clear from this battle, was the ability of the enemy to have a lengthy underground cave and tunnel system, that allowed enemy troops to move from one place to another. Pillboxes were also heavily fortified, using concrete walls to separate into four chambers, with a shooter in each one. Each contained unit was also covered by a semi-automated sliding door that snapped shut just after the shooter had made his shot. Therefore, each section had to be cleared out to get the whole package fortification destroyed. 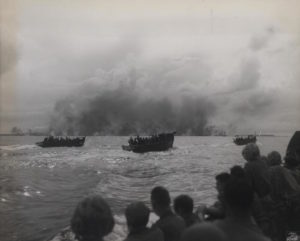 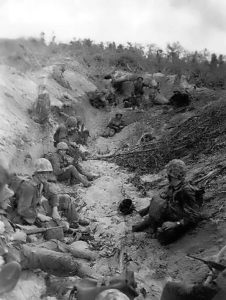 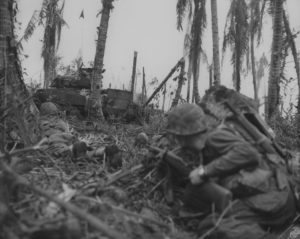 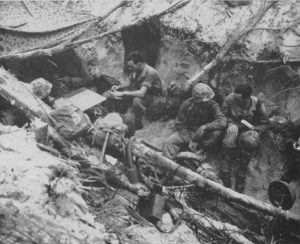 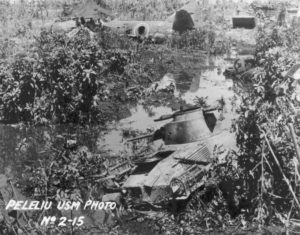 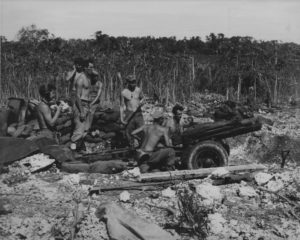