Posted on December 1, 2016 by admin in Battle Briefings

When Adolf Hitler took over Poland in September of 1939, England and France declared war on Germany, but were too late to help Poland recover from the German assault. The nine-month period after the declaration of war by England and France, came to be known as the “Phony War”, because there was very little fighting between the three parties of Germany, France, and England. But in May, 1940, after Hitler turned his sights on France, everything would change.

Hitler decided, first, that he would take over Denmark, and then Norway, with both campaigns being successful, but at the cost of half of his German navy destroyers (10/20), three out of eight cruisers, two battle cruisers, and one pocket battleship. This path over land, and by sea in the North and Norwegian Seas, was of great importance in securing for Germany, the resources for iron and ore needed for its military use.

Then on May 10th, Hitler moved his forces into Belgium and the Netherlands, taking them over as well, all in preparation for the attack on France. At this point, the British had just installed Winston Churchill as Prime Minister, replacing Neville Chamberlain, and the British and France had to quickly combine forces in order to make a stand against Hitler in Belgium. While the Allies had almost enough resources to hold off Hitler, particularly at the Maginot Line, the placement of the Allied troops and fortifications in other areas were too spread out, whereas the German strike forces were extremely concentrated and organized.

The first route of attack for the Germans was to trap the English, French, and Belgium forces by breaking through the Sedan, and heading west towards the Channel. The Germans used the blitzkrieg tactic, deploying seven panzer tank divisions, Stuka dive bombers, and dropping parachute and airborne divisions behind the lines, where they could soften up the enemy in preparation for the final blow. This was accomplished by the 15th of May, whereupon the Dutch finally surrendered.

Meanwhile, the main focus for the Germans was to punch through the Ardennes Forest on May 10th, erroneously considered by the French, to be almost impenetrable because of the dense trees and poor roads. Therefore, fewer French forces were in place to help fortify this barrier.

Once the Germans had successfully moved through the Ardennes, they crossed the Meuse River, took over Sedan, and by May 16th, the Germans were nearly sixty miles west of Sudan, with very little resistance left. On May 20th, the 2nd Panzer Division had reached Abbeville, located at the mouth of the Somme River, close to the Channel, finally closing the circle on three French armies, the remaining Belgium forces, and the British. One large mistake was made by Hitler at this point, in that he ordered the halt of his forces, which provided a miraculous sneak opportunity for the British to evacuate from Dunkirk. Nearly 200,000 British soldiers, 140,000 French troops, and hundreds of refugees (Operation Dynamo), managed to evacuate before the Germans caught on to what they were doing. Once the Germans figured out what was happening, they attacked Dunkirk, and it fell on June 5th, 1940. Most of the evacuees made it out, and back to England, but numerous vessels were also lost, due to the bombing of ships from the German Junkers Ju-87 dive-bombers.

From this point, the Germans began a massive surge across France from all points, heading towards Paris. While there was some resistance from the French, they were ill-prepared to meet such a forceful, well-organized German army. On June 14th, German troops entered Paris, which surrendered with barely a fight, while the French government fled to Bordeaux, only to finally surrender on June 25th. , Premier Paul Reynaud resigned from the government, and was replaced by Marshall Henri Philippe Pétain, who signed the armistice on June 22nd, thus establishing Vichy France under German command. 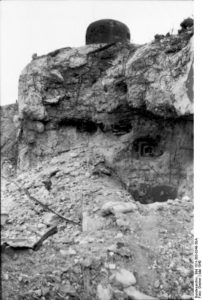 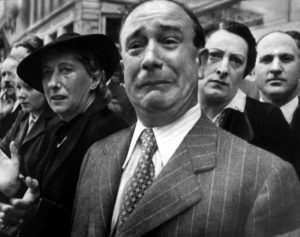 A French civilian weeps as German soldiers march into Paris. This starts the beginning of Nazi occupied France for the next 4 years, June 14 1940
Source: National Archives and Records Administration 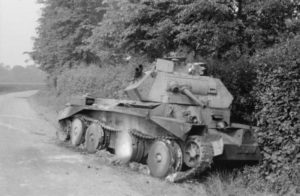 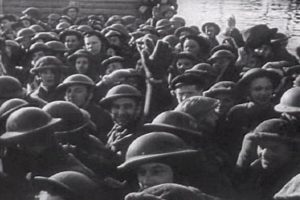 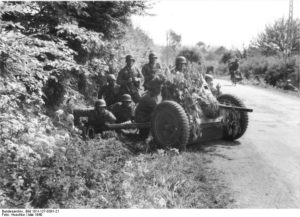 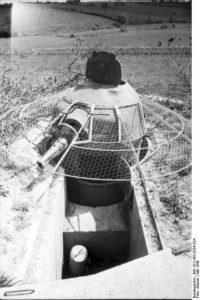 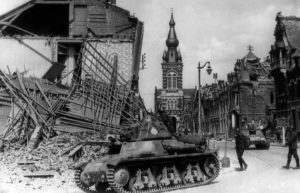 French soldiers and Hotchkiss H35 cavalry tanks advance through a damaged town, May 1940 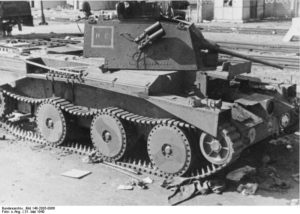 Knocked out British Cruiser Mk III cavalry tank in the Calais, France May 31 1940
We cannot use this one unless we find the name of the photographer – it was not listed here.