Operation Cobra (The Breakout from Normandy) 1944

Operation COBRA:
The Breakout from Normandy

After the Normandy invasion, the Allies had captured St Lô and were now stretched along the northwest coastline, ready to move inland, with the Americans headed for Brittany. Lieutenant General Omar Bradley, in charge of the American’s First Army, along with the other Allied leaders, understood from intelligence that the German front was already weakened from the invasion battle.

With General George C. Patton, the commander for the Third Army in mind, he devised a plan for breaking through the German lines, with the theory that those lines would break down and collapse after a hard push. This would become Operation Cobra. Cobra was supported by other operations conducted by the British, the Polish, and Canadian forces in Operations Atlantic, Spring, Totalise, Goodwood, and Tractable. They would capture Caen, while the Americans wanted Cherbourg, a vital seaport for receiving Allied supplies.

The opening attack would be aerial bombing by 200 bomber planes, but it was a risky plan because dropping bombs, as well as napalm on a battlefield, was less than exact. The idea was to drop over 3,300 tons of bombs and then the Allied troops could move in at once to mop up the mess and take out whoever was left. Unfortunately, Bradley also set his front line at only 1,000 yards outside the bombing perimeter, expecting the air force to bomb in the supposedly agreed-upon parallel formation.

The bombing attack was scheduled several times, and then cancelled. But on July 24th, some of the 8th Air Force bombers (1,500 B-17s and B-24s) already on route to bomb the site, did not receive the message and the bombing attack killed 25 soldiers from the 30th Infantry Division, and injured 130 more. The attack was then set officially for the next day (July 25th) but again, the lack of precision of the bombs took out even more Allied soldiers. Over 100 soldiers were killed, along with nearly 500 casualties. Well-known war correspondent, Ernie Pyle, was in the midst of the fire storm and reported on the grim battle. Meanwhile, the artillery unit of the 7th and 8th Corps added to the shelling of the region, and with 2,251 tanks, with 60 percent fitted with hedge-cutting saw-tooth scoops (“Rhinos”) on the front, the Americans could move through any terrain.

The results of the bombing attacks on the German side destroyed an extensive area of their front by taking out the communication systems, killing and wounding German soldiers, and made the Panzer Lehr Division inactive, due to tanks being turned over by the blasts. Some tanks also fell into the resulting bomb craters, with no chance of ever getting out of them. Only 190 German tanks were in this sector, as Adolf Hitler had moved all the others, including the formidable Tiger and King Tiger tanks, to Caen to support that attack.

While this was a major turning point, it also left some difficulties for the Allied troops, particularly with their own tanks moving through the lines, as they had to move carefully around all the craters to avoid getting stuck. The Germans had also set up 88 mm tank buster guns, hidden within the bombed rubble, and the Americans had to take each one of those out before advancing further. Adding to that problem were remaining German soldiers who made ‘hit-and-run’ guerrilla attacks, using any berm-styled rubble formations left from the bombings, to hide behind.

However, once the Allied troops had moved through the area, progress was made in moving faster, with an added three divisions from the US Army VII Corps to bolster the advance. The Americans entered and liberated Avranches on July 30th, and later repelled a German counterattack on August 7th, which was, in the end, of little consequence. Marigny and St. Gilles were also main infantry objectives in the march forward.

As each operation conducted by the Allies achieved its goals, the Allied forces began surrounding any remaining German forces. While 100,000 Germans did manage to escape, nearly 50,000 German soldiers, along with 350 tanks and 2,500 military vehicles were captured by the Allied forces by August 22nd. From here, the goal was to move on to Paris and liberate her. Ultimately, the Germans suffered their losses because Adolf Hitler refused to listen to his generals about the severity of the situation in France, and ordered that forces be where they were not really needed. The success of COBRA was also the beginning of the end of the German occupation of France. 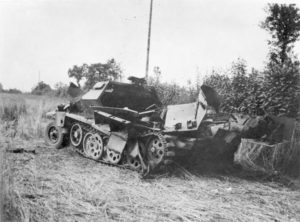 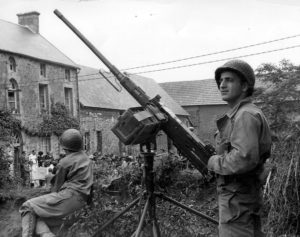 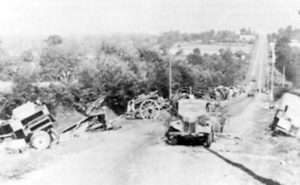