Rendezvous With Destiny: How Franklin D. Roosevelt and Five Extraordinary Men Took America into the War and into the World 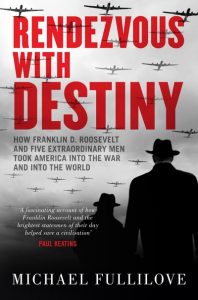 In the dark days between Hitler’s invasion of Poland in September 1939 and Japan’s attack on Pearl Harbor in December 19421, Franklin D. Roosevelt sent five remarkable men-Sumner Welles, William “Wild Bill” Donovan, Harry Hopkins, Averell Harriman and Wendell Willkie- on dramatic and dangerous missions to Europe that would prove crucial to the course of the Second World War. The five envoys’ highly unorthodox missions took them into the middle of the war and exposed them to the leading figures of the age. Taken together, they plot the arc of America’s transformation from a divided and hesitant middle power into a global leader. Drawing on vast archival research, Rendezvous with Destiny is narrative history at its most delightful, stirring and important.