Posted on February 7, 2018 by admin in Battle Briefings

While most countries were gearing for war with Hitler, Mussolini, and other axis powers, China was already in a war against the aggression of Japan. In 1937, there occurred the Marco Polo Bridge incident on July 7th, which started the first small battle between the Chinese and the Japanese over a missing Japanese soldier, who was found to have been shot and killed. Up to this point, there had been only minor skirmishes, although Japan had already infiltrated Manchuria, starting in 1931.

Under various agreements conducted at the beginning of the century, any country with an operating legation, could keep a small number of soldiers handy for protection and travel. But Japan had over-extended itself in its quest for taking over land with vital natural resources. There were also hidden political agendas at work between the Communist and Kuomintang (KMT) parties in China, and with the KMT Party involved with the Japanese, the Communists would have an easier time making its own moves, although this was never said outright. The Marco Polo Bridge incident, however, escalated hostilities between the two countries, with the next two battles exacting a horrific toll on life.

The Battle of Shanghai occurred between August and November of 1937, with Chiang Kai-shek as the leader of the KMT Party, trying to push the Japanese garrison out of Shanghai and into the river. But Chiang’s forces suffered terrible losses, especially when Japanese reinforcements arrived, both from the Yangtze River and from foot troops. The final Shanghai battle at the Sihung Warehouse (October 27th-November 1st), while a loss for the Chinese, was also shown to a global audience to garner support and help from the Western Powers against Japan. But that never happened.

The following Battle for Nanjing (Rape of Nanking) was a brutal battle, with an estimated 100,000 Chinese slaughtered, with women raped before being killed, and others buried, dismembered, or drowned alive. It seemed there was no hope for the people of China against the Japanese invader. But then came a battle at a small town that would change everything for the Chinese people, and break the global perception that Japan was undefeatable.

The Battle of Taierzhuang occurred during the Japanese’s effort to merge and tighten up the areas around Shanghai and Nanking after those two battles were won. The larger engagement was known as the Battle of Xuzhou. Taierzhuang was located on a strategically-placed system of railroad and canal junctions, including the Grand Canal of China, and was logistically important for the Japanese to take over and remove the Chinese forces that had built up there over time. It would then be easier for Japan to bring in more supplies and reinforcements.

However, KMT Generals Li Zongren and Bai Chongxi, along with Commanders Yu Xuezhong and Wei Yunsong, planned on surrounding the Japanese in the area, and with the help of thousands of fighters, dressed as local farmers, began sabotaging Japanese resupply lines, making it very difficult for the Japanese to stay supplied.

The battle took two weeks of intense skirmishes, including an attempt by the Japanese to tunnel under the walls of Taiuerzhuang, to take the town from the inside. But the infiltrators were caught and executed. When the Japanese then made a direct-on attack into the town, Chinese fighters surrounded them, forcing the Japanese to make a hasty retreat.

This first win for the Chinese people was celebrated in many cities, and showed everyone that the Japanese were not totally invincible. They could be defeated and this win at Taiuerzhuang, built up the morale of the Chinese people and its fighters. 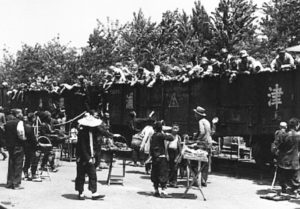 Chinese troops arrive by train near Taierzhuang March or April 1938
Source: Republic of China Ministry of the National Defense 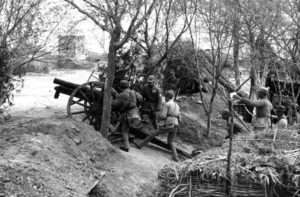